Review: If I Were You - Lisa Renee Jones 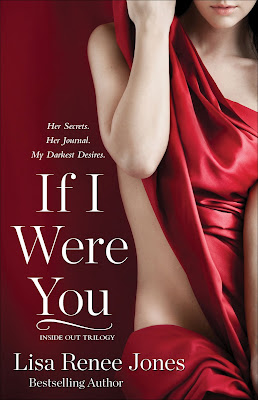 Certain something sinister has happened, Sara sets out to discover the facts, immersing herself in Rebecca’s life. Soon she’s working at the art gallery Rebecca worked at and meeting Rebecca’s friends. Finding herself drawn to two dangerously sexy men, the manager of the gallery and a famed artist, Sara realizes she’s going down the same path Rebecca took. But with the promise of her dark needs being met by a man with confident good looks and a desire for control, she’s not sure anything else matters. Just the burn for more.

Review:
When Sara is given the key to a storage unit and asked to sell the contents she feels guilty about making money by selling items that don't really belong to her. After reading the journals that she finds inside she is convinced that something must have happened to their owner Rebecca for her to leave her most precious possessions unclaimed so she decides to track Rebecca down and return them her. Unfortunately Sara only has a limited number of clues to work from, starting with the art gallery that Rebecca works in. When she finds out that Rebecca is on an extended holiday but that nobody knows her exact whereabouts she becomes concerned for Rebecca's safety and even more determined to find out what happened to her. Who is the mysterious "Master" that Rebecca talks about in her journals and did he do something worse than help fulfil Rebecca's deepest, darkest fantasies?

I've reached the point where I don't want to start any new romance trilogies until all of the books are available, the long wait between books has just been killing me and I much prefer to be able to devour a series I'm enjoying in one long reading binge. I'd heard so many good things about the Inside Out books and the synopsis was very intriguing so now that Revealing Us is available it was finally time for me to start reading the series. I have to confess that now I've finished If I Were You I'm left with mixed feelings though and I'm still not quite sure what to make of it all. There were some things I really didn't like about the story but at the same time I'm really curious to see how everything plays out - especially after that killer cliffhanger ending (it's a good job I don't have to wait for the second book to be released because I would be screaming in frustration!).

If I Were You is definitely an interesting start to the series, I absolutely love the idea of coming across someone's old journals inside a storage unit and then deciding to uncover what happened to the person who wrote them. It sounds like so much fun digging into a real life mystery! However, I did find myself a little disturbed by the way Sara goes about it. She pretty much turns into a creepy stalker who manages to take over the life that Rebecca has left behind, even to the point of getting hired to do Rebecca's job until she comes back from her extended leave of absence. What I didn't like was the way that as soon as she turns herself into Rebecca mark 2 she seems to forget all about that fact that a woman is missing under suspicious circumstances. Sara is too busy ogling the hot men she is now surrounded by to remember that she could be in danger and I wanted to shake her and remind her! Sometimes Sara puts herself into such stupid situations that you're just sitting there waiting for someone to chop her head off and throw her body to the sharks.

Then you have the men who were in Rebecca's life and now subsequently are in Sara's. First there is gallery owner Mark who just happens to be Sara's new boss and who is one of the most controlling, arrogant, alpha assholes I've ever had the displeasure to come across. There really was nothing likeable about his character and the fact that he was sexy was not enough to redeem him in my eyes. Everything about him screams "serial killer" but since we still don't know what has happened to Rebecca I'm assuming that is far too obvious and he'll end up being the one to protect Sara (I'll tell you right now that I will NOT be happy if she ends up with him though!).

Then you have the incredibly sexy artist Chris who displays his work at the gallery. Now I actually really liked his character in the beginning, I found myself quite drawn to his dominant personality and he was super hot when he took over in the bedroom. My problem was that I felt Sara trusted him far too quickly considering he was someone that Rebecca would have been in regular contact with and therefore he should have been a potential suspect. I also really didn't like some of his actions - the point where he deliberately got them caught on camera together to send a message to her boss just pissed me off and made me want to slap him. Chris ended up pushing a little too far on the dominant side and became quite controlling outside of the bedroom and that just didn't sit well with me. I'm still on the fence as far as Chris goes though, I think he has the potential to redeem himself but I'm not convinced that he'll actually do it. When you put Chris and Mark in the same room together I was reminded of two dogs fighting over a juicy bone and I kept expecting one of them to pee on Sara to mark their territory!

I guess my whole problem with If I Were You is that I'm on the fence about it, I didn't particularly dislike it but I didn't really love it either. I'm curious about what happened to Rebecca and I'm kind of interested to see how things develop between Sara and Chris but even though it's been 3 weeks since I finished reading it I've had no inclination to pick up the next instalment. I'm sure I'll get to it eventually but unfortunately it's not become an addiction that left me desperate for my next fix.