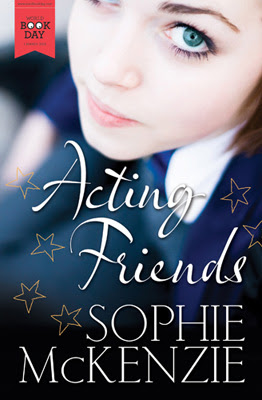 Acting Friends is a prequel to the Flynn series, written specially for World Book Day 2012. We're now offering everyone the chance to read the story with a free download of the complete book!

Life at her new school is not going smoothly for River. After accidentally making an enemy of the troubled Shaz, she hopes at least to have found friendship with classmates Emmi and Grace. However, when it comes to the boy of her dreams, can River count on any of her friends?

A great introduction some of the characters in the new Flynn series, Acting Friends sets the scene for Falling Fast.

Review:
Acting Friends is a short story that was originally published for World Book Day in 2012 and is now available to read for free on the Simon & Schuster website HERE. It is a prequel to Sophie McKenzie's Flynn series and is set a couple of years before the first book Falling Fast.

It's a cute story that follows River through her first couple of weeks at secondary school. I'm sure most of us remember the nerves of starting a new school, one that seems so much bigger than your last one did and where instead of being one of the biggest kids you suddenly find yourself one of the smallest. I thought Sophie McKenzie did a fabulous job of capturing how lost and alone River felt before she gradually started to make friends. We don't get to see Flynn in this story since it's set several years before he and River meet but you do get to see how she met her friends Grace and Emmi which was really nice.

I'm sure fans of the series will enjoy this story and since it's a free read it might be a good way for people to try the series and see if they want to go on to read the main books. Bear in mind that the characters are only about 11 in this story though so it has a younger feel to it than Falling Fast where they are 15/16. The ebook does also include the first chapter of Falling Fast though so that should be enough of a taster for you to decide.

Source: Downloaded for free from the Simon & Schuster website HERE.

Other reviews of this book:
If you have reviewed this book on your blog please leave a link to your review in the comments & I'll add the link here.
at 18:00