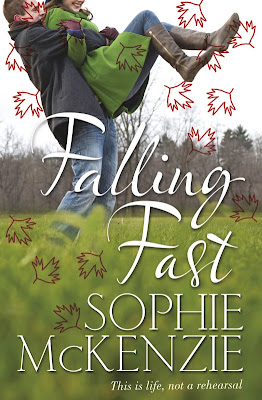 When River auditions for a part in an inter-school performance of Romeo and Juliet, she finds herself falling for Flynn, the boy playing Romeo.

River believes in romantic love, and she can't wait to experience it. But does Flynn see things the same way?

The path of true love never did run smooth . . .

Review:
River is a born romantic and she wants nothing more than to fall in love with a boy and have him love her back. She meets Flynn when she auditions for a school play but with him playing Romeo to her best friend's Juliet things aren't going to be easy for them.

Falling Fast is the first book I've read by Sophie McKenzie and it won't be the last, it was an enjoyable read and one that is perfect for when you have a couple of hours to spare and want to fill it with a sweet romance with realistic teenage characters. River and Flynn could have been people I was friends with at school and I enjoyed watching them cope with the perils of falling in love for the first time.

River was a really sweet character, she believes in love and is looking for that perfect fairytale romance that probably a lot of young girls dream of (I know I did at that age!). She is very innocent and has a very positive way of looking at the world which is something I really liked about her. Flynn was a character I had mixed feelings about. He could be very caring and he was incredibly protective towards River and his sisters but he had a darker side that left me feeling uncomfortable. He has had a very difficult upbringing so I could understand where he was coming from but he has a huge chip on his shoulder and I hated it when he took his frustrations out on River. She had never been anything but sweet and loving towards him so I was annoyed with his attitude at times. I think I understand where the author is going with this though and I liked the fact that River called him on his bad behaviour rather than just sat back and took it but it did make it hard for me to love his character.

I think both River and Flynn have a lot of growing up to do, Flynn definitely needs to start working on his resentment and anger issues and I'm hoping that River will build on her own confidence and continue to stand up to him. I'm intrigued to see how things progress with both of them as the series continues. I think that this will be a good series to show teenagers that love isn't all hearts and flowers in the real world. People have issues and problems that can effect their relationships and it takes work to make a success of things. I think it could also show teenage girls that they shouldn't put up with guys who don't treat them right and that they should never, ever feel pressured into doing anything that they are uncomfortable with. Flynn straddles a thin line at the moment and I think he can easily tip either way - into a mature young man with his whole life ahead of him or towards becoming an abusive jerk just like his father was. I know which way I want to see him turn and I'm hoping we see him get there.