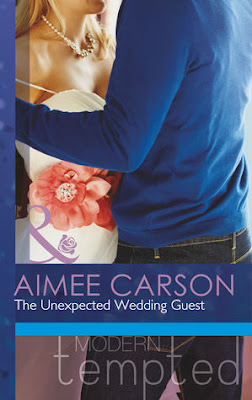 "Surprised to see me?"

Getting caught in her wedding dress by her drop-dead-gorgeous ex-husband is Reese Michael's worst nightmare. Especially when her perfect-on-paper fiancé then cancels their wedding!

Reese has spent years trying to forget how her marriage to Mason Hicks crashed and burned - yes, their chemistry was incredible, but a girl can't live on lust alone! And what's a jilted bride supposed to do when the one man she could never forget is back in her life, as irresistible as ever? Mason might be her own personal brand of Kryptonite, but surely life is meant to be lived a little dangerously . . . ?

Review:
I have been a fan of Mills & Boon romances since I was a teenager and they always hit the spot when I'm looking for a fun, sexy read that is going to leave me with a smile on my face. So when I was offered review copies of the books in their new Modern Tempted range I jumped at the chance to read them. I always love a good second chance romance so I was looking forward to The Unexpected Wedding Guest and it was an enjoyable story.

Reese and Mason married young and neither of them were fully prepared for the trials of marriage. Mason spent most of their short time together on tour in Afghanistan and Reese missed him like crazy. When he came back suffering with PTSD and acting like a completely different man she didn't know how to help him and she was devastated when he pushed her away. She has spent years trying to put her past behind her and is finally ready to move on with her perfect fiancé who is just the kind of guy her parents always wanted her to marry. When Mason turns up looking for "closure" and her fiancé walks away just days before their wedding Reese is forced to face up to the fact that she never got over Mason but will she be brave enough to give him another chance?

I think what I loved most about this one is that both Reese and Mason had made mistakes in the past and they were willing to look at things from each other's perspectives to figure out exactly why their marriage ended the way it did. They were both able to own up to the part they played in the breakup and were willing to discuss things like adults which made me believe that they could build a future together. Both of them have done a lot of growing up in the last 10 years but Reese in particular has gone from a spoiled, pampered princess to a woman who can stand on her own two feet and is willing to fight for what she wants. She is forced to face a few uncomfortable home truths but she does it with dignity and is determined to make changes in her life. It didn't hurt that they both had fabulous chemistry too!

The Unexpected Wedding Guest is the first book in a linked series featuring four best friends who were room mates in college. It was interesting to see the dynamics between Reese, Gina, Cassie and Marnie and I'm looking forward to getting to know them all better as we read their individual stories. All four books have been written by different authors with Girl Least Likely to Marry by Amy Andrews also released this month (I'll be reading that one very soon so keep an eye out for my review). The next two books, Maid of Dishonor by Heidi Rice and Last Groom Standing by Kimberly Lang, will be published in October and I'm already looking forward to getting my hands on them.

Source: Received from Mills & Boon in exchange for an honest review.