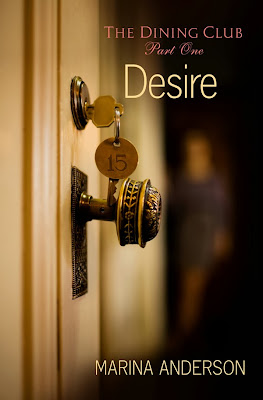 Young, ambitious theatre director Grace has no time for distractions, but she just cannot resist enigmatic city financier, David. Alluring, charismatic and an incredible lover - David never lets Grace get too close. So when he invites her to a weekend at his private club, Grace is thrilled.

Arriving at the secluded location, and excited by her nerves, David reveals the truth behind the Dining Club: a place where guests are taught to open their minds, and their bodies to erotic challenges. If she passes the tests, she is promised ecstasy beyond her wildest fantasies. If she fails, she's forbidden to ever set foot in the exclusive club again. But even as David's seductive commands make Grace feel more daring than ever before, she begins to fear for their future. What if she fails one of the Club's tantalizing trials? Will David still want her or will she lose him forever?

Review:
Desire is the first instalment of an eight part serialized novel called The Dining Club. Each of these instalments are fairly short (around 30 pages) so don't expect to get a full story in any of them, you really are going to have to read all eight parts to reach what will hopefully be a satisfactory conclusion (I can't confirm that either way just yet because I've only read this first part!). The story will be released as a complete novel in January 2014 so if you might prefer to wait until then to read it if you don't like the idea of waiting between instalments.

I really like the idea of reading a serialized novel so you get a bite sized part of the story that is easy to read in a single sitting even if you don't have much time to spare. What I don't like about it is that it works out so much more expensive overall than it does if you wait for the full length novel. For example, the first part is currently £0.99 on Amazon.co.uk with the remaining seven parts being £1.49 each so you'll pay a total of £11.42 for the 8 ebooks that make up the whole story when the paperback version of the complete book can currently be pre-ordered for just £5.24. As a consumer that really upsets me and if I hadn't been given free review copies of the first four instalments from the publisher via Netgalley then I certainly wouldn't spend that kind of money on them.

Now, to look at this first instalment in a bit more detail I have to say that Desire was much better written than the other serialized novels I've tried. We are introduced to the main characters Grace and David who have been dating for six months. Grace is happy with the way things are going between them, they get on well, have fun together and their sex life is fantastic but although she is on the verge of falling in love with him she feels that David is holding himself back. When David offers to take her away for the weekend she thinks it is the next step for them becoming more serious about each other, little does she know that David is taking her to a sex club, one where she must pass a series of tests if she wishes to continue seeing him.

Now the idea of the club and the different challenges Grace will face intrigues me, I have to say that if they had discussed it in advance and it was something that they were both interested in trying together I would have felt much better about it though. What bothers me is that David pretty much gives Grace and ultimatum that if she doesn't pass the any of the tests or isn't willing to try whatever he wants her to do then their relationship is over. He has played the perfect boyfriend for six months, waited until she is in love with him and then he pushes her into something that isn't necessarily what she wants. I don't have a problem with him enjoying the club (we don't really know what is going to happen there yet - we'll have to wait for part two to get any details - but it's definitely some kind of BDSM club) but I do have a problem with his deception and the fact that he has been visiting the club on a monthly basis behind her back without telling her about it. I think it's important to be upfront in a relationship, if you have a kink that's fine but you should let the other person know about it and let them decide if it's something they're willing to participate in before they fall in love with you.

Issues aside I'm still curious enough to want to know what happens next. I'm sure Grace is going to find she enjoys things she never would have even considered before, I just wish she'd been given more of a choice about whether she wished to try them! I already have the next 3 parts so I'll be reading at least that far to see how things progress between them. Hopefully we'll get to know more about David's motivations and why he went behind Grace's back for so long before introducing her to his darker side.