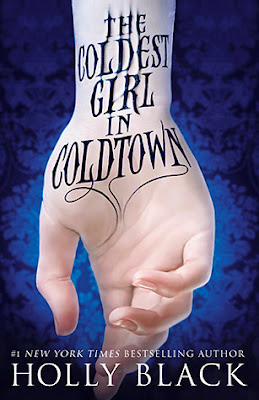 Tana lives in a world where walled cities called Coldtowns exist. In them, quarantined monsters and humans mingle in a decadently bloody mix of predator and prey. The only problem is, once you pass through Coldtown’s gates, you can never leave.

One morning, after a perfectly ordinary party, Tana wakes up surrounded by corpses. The only other survivors of this massacre are her exasperatingly endearing ex-boyfriend, infected and on the edge, and a mysterious boy burdened with a terrible secret. Shaken and determined, Tana enters a race against the clock to save the three of them the only way she knows how: by going straight to the wicked, opulent heart of Coldtown itself.

The Coldest Girl in Coldtown is a wholly original story of rage and revenge, of guilt and horror, and of love and loathing from bestselling and acclaimed author Holly Black.

Review:
Holly Black is an incredibly popular YA author so I'm embarrassed to admit that this is the first of her books that I've read. Unfortunately I don't think I picked a very good place to start because I found The Coldest Girl in Coldtown was a very difficult book to get through. I really expected to love this book, I've heard so many good things about the author that I was sure it would be fantastic but I'm afraid it just missed for me. Perhaps my expectations were too high when I started it but I had to force myself to carry on reading and it took me five days to get to the end. I think I'd have given up about halfway through if I'd bought this myself but because I received the book from Amazon Vine I have to write a review for it and I hate to review a book I didn't finish.

Tana wakes up in the bathroom the morning after a party with her classmates, she is hung over, tired and can't remember much about what happened the night before. As she gets up and goes in search of breakfast she realises that all of the other party guests have been killed by vampires, the only survivors are herself, her ex-boyfriend Aidan and a mysterious boy called Gavriel. They only just escape with their lives but Aidan and Tana both suspect they have been infected with the vampire virus. Rather than risk spreading the virus or hurting their families they decide to hand themselves in at one of the quarantined Coldtowns.

Unfortunately after the fast paced start the story really slowed down and I found myself struggling to carry on reading. The idea of the Coldtowns was fascinating, I loved the fact that Holly Black has brought back the dark and dangerous vampires who wouldn't think twice about draining someone dry and killing them and I really liked the idea of the vampires becoming like celebrities. They rule the Coldtowns and the parties they host are broadcast to the general population via live feed like some kind of Big Brother experiment. I could understand why so many hangers on were hooked on the idea of living forever and getting to live the glamorous high life as a vampire, they travelled to the Coldtowns in droves looking for salvation. I couldn't imagine myself doing the same thing but I was interested in the idea of it. I was pleased that the author didn't shy away from showing the darker side to the life as well as the fun side though. The problem was that there was just so much world building going on. It really slowed the pace of the story and it felt like you had to slog through page after page where nothing actually happens.

I think my main problem was that I didn't connect to any of the main characters though. I didn't particularly like or care about any of them. Tana felt so alien, she hardly shows any emotions and even waking up in a house full of her murdered friends she seemed very blasé about it all. I couldn't understand the relationship she had with Aidan and I really wasn't a fan of his character, he was so shallow and selfish that I wanted to punch him and I lost respect for Tana because of the way she let him treat her. I also didn't believe the attraction between her and Gavriel, I saw it coming a mile away but hoped I'd be proved wrong because it just didn't make sense to me. We did meet a couple of interesting side characters in the Coldtown and I would have loved for Valentina and Jameson to have been given more page time. If they'd been the main characters I think I would have enjoyed the story much more because they seemed so much more human than everyone else.

Unfortunately The Coldest Girl in Coldtown just didn't end up being the right book for me. I've seen a lot of positive reviews for it so I'm obviously in the minority and I would recommend reading through some of those reviews before you make up your mind about buying it. I will say that Holly Black has a great imagination and she writes some great descriptive scenes so I'm definitely planning on trying some of her other books. Hopefully I'll enjoy them a lot more than this one!