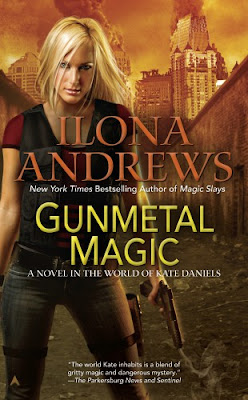 Some people have everything figured out - Andrea Nash is not one of those people. After being kicked out of the Order of Knights of Merciful Aid, Andrea's whole existence is in shambles. All she can do is try to put herselof back together, something made easier by working for Cutting Edge, a small investigative firm owned by her best friend, Kate Daniels.

When several shapeshifters working for Raphael Medrano - the male alpha of Clan Bouda as well as Andrea's former lover - die unexpectedly at a dig site, Andrea is assigned to investigate . . . and must work with Raphael. As her search for the killer leads her into the secret underbelly of supernatural Atlanta, Andrea knows that dealing with her feelings for Raphael may have to take a backseat to saving the world . . .

Review:
I have loved Andrea ever since she was introduced to the series so I was quite excited when I found out she was getting her own book. I love her friendship with Kate and the fact that she is another strong female character who is able to stand up for herself and fight when she needs to. I also really enjoyed the novella Magic Mourns staring Andrea and Raphael so after the developments in Magic Slays I was very curious to see how they would manage to fix their relationship.

Andrea has been through a lot since the series began, she has spent years trying to forget her upbringing at the hands of an abusive bouda pack and has done everything in her power to push her Beastkin side into the background and live as a human. It took a lot of work for her to gain respect in the Order but as soon as they found out about her shapeshifting abilities they kicked her out. Now she is left feeling lost and abandoned and is trying to rebuild a new life for herself working alongside Kate. Andrea needs to come to terms with who and what she is before she can move forward in her life though. It's something she has put off for a long time but when she decides to embrace it she goes full out with a take no prisoners attitude. It was great to see her come to terms with her past and start to accept herself and find her place within the Pack hierarchy. I loved seeing so much growth in her character, she really did a lot of growing up and is now stronger than ever.

I also enjoyed seeing her fighting for her man. Raphael did some things that really annoyed me in this story, in some ways he acted like a spoilt child but Andrea wasn't afraid to call him out on it and give him the kick up the butt that he needed. They make a great couple and I was pleased to see them start working things out. Although the story has a lot of focus on them as a couple it also has all the things you'd expect from Ilona Andrews and there is plenty of action to keep you on the edge of your seat. It was nice to see brief appearances from Kate and Curran but I'm glad that they weren't in the story too much because it would have been too easy for them to take the focus away from Andrea and Raphael. Andrea and Raphael will never replace Kate and Curran as my favourite couple but I still really enjoyed spending time with them and would like to see more stories from their point of view in the future.

Gunmetal Magic also includes Magic Gifts, a novella starring Kate and Curran. The timeline coincides with the first half of Gunmetal Magic and although the novella is at the back of the book I would actually recommend reading it first. Anyone who has read any of my previous reviews will know how much I adore Kate and Curran so of course I jump at the chance of reading any story containing them and Magic Gifts was a fabulous one.