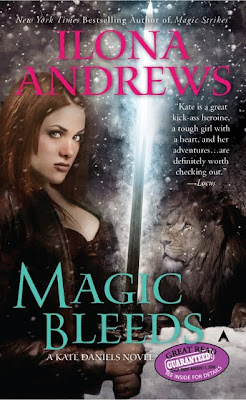 Atlanta would be a nice place to live, if it weren't for the magic. When the magic is up, rogue mages cast their spells and monsters appear, while guns refuse to fire and cars fail to start. But then technology returns, and the magic recedes as unpredictably as it arose.

Kate Daniels works for the Order of Knights of Merciful Aid, officially, as a liaison with the mercenary guild. Unofficially, she cleans up the paranormal problems no one else wants to handle - especially if they involve Atlanta's shapeshifting community.

When she's called in to investigate a fight at the Steel Horse, a bar on the border between the territories of the shapeshifters and the necromancers, Kate quickly discovers there's a new player in town. One who's been around for thousands of years - and rode to war at the side of Kate's father.

This foe may be too much even for Kate and Curran, the Beast Lord, to handle. Because this time Kate will be taking on family . . .

Review:
Please be aware that this review will contain minor spoilers - I've tried but I just can't seem to write it without them!

So after the ending of Magic Strikes I couldn't wait to get started on Magic Bleeds and see Kate pay up on her bet with Curran where she promised to cook him dinner naked. It feels like I have been waiting FOREVER for them to finally give into their desire and become a couple so I had such high hopes for that night. Well you can imagine my disappointment when Curran fails to turn up - I think I was almost as broken hearted by the way things turned out as Kate was, especially when she calls the keep to make sure he is OK and gets a big brush off. As you'd expect from Kate she turns her pain into anger and she becomes absolutely determined to avoid all contact with Curran in the future, something that she knows isn't going to be easy when she is the Order's main point of contact for all things involving the Pack. It gets especially difficult to avoid him when a mysterious new arrival in town starts targeting shapeshifters, not only are they behind multiple deaths but they also seem determined to start a modern day plague in the middle of Atlanta. It doesn't take too long for Kate to figure out that one of Roland's most trusted warriors is in town, unfortunately this is one family reunion that she is never going to forget - that's if she even survives it.

Just when I think I can't love this series more Ilona Andrews pulls it out of the bag and delivers yet another 5 star read. Magic Strikes has everything I've loved about the previous books - the fantastic characters, edge of your seat action, truly evil enemies who aren't going to be easy to beat and to top it all off the absolutely wonderful banter between Kate and Curran. They may have a HUGE misunderstanding at the beginning of the book but oh boy do they make up for it further down the line and finally, FINALLY we get to see the moment we've all been waiting for!!!! I seriously don't think I'll ever get enough of this couple or their friends so I just hope the authors start writing faster - I need at least a book a month from them to keep me happy!

The stakes are higher than ever and Kate is facing her greatest battle yet. It honestly makes me worry about what will happen when she eventually has to face Roland, I really don't know how she will be able to survive it. She isn't the type to give in easily though and she kicks arse in this book just as well as (if not better than) she ever has before. As much as Curran steals the show every time he steps onto the page I also adore the secondary characters in this series, Angela is just brilliant and she gives Kate the kick up the butt that she needs when it comes to giving Curran a chance to explain himself. I have to give a special mention to Kate's new attack poodle too, he added a lot of light relief to the story and I hope we'll see more of him. There were just so many moments I loved about this book, particularly towards the end when Kate has a face off with the shapeshifter council to stand up for her man.

Lots of people have already reviewed this book and I'm not sure that I can articulate my thoughts well enough to come up with a coherent review so I'm just going to tell the rare few people who haven't started this series yet that they need to do it immediately. If you have started the series but are still playing catch up like I have been then you need to hurry up because the books really do just get better and better!