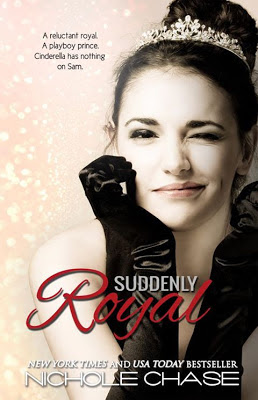 Samantha Rousseau is used to getting her hands dirty. Working toward a master’s degree in wildlife biology while helping take care of her sick father, she has no time for celebrity gossip, designer clothes, or lazy vacations. So when a duchess from the small country of Lilaria invites her to dinner, Samantha assumes it’s to discuss a donation for the program. The truth will change the course of her life in ways she never dreamed.

Alex D’Lynsal is trying to keep his name clean. As crown prince of Lilaria, he’s had his share of scandalous headlines, but the latest pictures have sent him packing to America and forced him to swear off women—especially women in the public eye. That is, until he meets Samantha Rousseau. She’s stubborn, feisty, and incredibly sexy. Not to mention heiress to an estate in his country, which makes her everyone’s front-page news.

While Sam tries to navigate the new world of politics and wealth, she will also have to dodge her growing feelings for Alex. Giving in to them means more than just falling in love; it would mean accepting the weight of an entire country on her shoulders.

Review:
Sam is a grad student who is working hard to get her masters degree in wildlife biology, she specialises in birds of prey and she loves her studies and her job working with rescued birds at her university. When she is invited to dinner with a Duchess from Lilaria she assumes it is something to do with the program she helps run and hopes to secure a donation. The last thing she expects is to find out that her family not only came from Lilaria but that she is the heir to a title and the queen wants her to return and take up her inheritance. The one thing that tempts her to visit is the fact that they have superior medical treatment that could offer a cure for her sick father but it also has the advantage of allowing her to spend time with the gorgeous prince yummy. Alex is the crown prince of Lilaria and has had his heart broken too many times by women who are only interested in his title and his money. He is trying to keep his head down and stay out of the limelight for a change and the last thing he wants is to get entangled with a woman that the press is desperate to get a glimpse of. That was before he met Sam though, she isn't like most of the women he knows, she doesn't care about money or the latest fashions and is reluctant to accept her own title let alone start dating a prince. He promises to be by her side every step of the way if she returns to Lilaria with him but can he win her heart and get her to stay there with him?

My friend loved this book so much that she convinced pretty much everyone she knows to join in a massive group read of it (there were 16 of us in total!). She had told us that Suddenly Royal was a fun, light hearted read with a Princess Diaries feel to it and no unnecessary relationship angst and I couldn't agree more with that assessment. I picked this up when I was in the mood for something light, something that would make me laugh out loud and leave me smiling and that's exactly what I got. In fact I think the smile was pretty much glued to my face the whole time I was reading. Yes, I'll admit that the story was a little predictable in places but how many romances have you read that aren't? I for one would be most disappointed if I picked up a romance and didn't get a happy ever after (or at least a happy for now) at the end of it! I started the story planning on reading a couple of chapters but before I knew it I was over 200 pages in and that to me is a sign of a good story.

Sam was a likeable heroine, a normal every day girl and the kind of person any of us would be friends with. She had good friends, a loving father and she cared about people and animals. She was thrown into the public spotlight when she found out about her title and inheritance in Lilaria but she never let it go to her head, in fact she tried really hard to carry on with her life as normal. Not that she had much of a chance at doing that when she was being hounded by the press every five minutes and couldn't even open her front door without having her picture taken by photographers but she didn't let that stop her carrying on with her everyday routine at college. Her life does change rather dramatically when she agrees to visit Lilaria but rather than sit around complaining she does her best to get on with things. I loved the fact that her reaction to everything going on around her was so normal, her behaviour felt realistic and that just made me like her even more.

Alex was a fabulous hero, he was cool, confident, compassionate and caring. He went out of his way to make things as easy for Sam as possible and he respected her opinion on things. He never once tried to force her into anything she wasn't comfortable with and he took the time to make sure she was OK with everything that was happening. It didn't hurt that he was sexy as hell and happened to be a prince too - don't all little girls have a prince charming fantasy at some point in their lives? I know I did! Sam is determined to resist Alex's advances because she doesn't think she could possibly be a queen and she assumes he is only interested in a temporary affair. She knows it would be too easy to get her heart broken if she gave in to temptation but she can't deny the chemistry between them forever, especially as Alex keeps proving to her over and over again that he will always be there for her.

Suddenly Royal is such a fun book to read with a fantastic couple at the centre and some wonderful side characters who never failed to entertain me. If you're in the mood for something light and fluffy then you can't go far wrong with this and I'm definitely going to be on the look out for more from Nichole Chase in the future - especially now I've found out this is going to be the first book in a series!