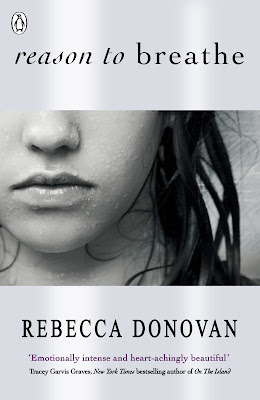 In a town where people worry about what they're seen in and who they're seen with, Emma Thomas doesn't want to be seen at all. She's more concerned with feigning perfection - which means pulling down her sleeves to conceal the bruises. Emma doesn't want anyone to know how far from perfect her life truly is.

But when Emma unexpectedly finds love it challenges her to recognise her own worth, at the risk of revealing the terrible secret she's desperate to hide.

Breathing Series:
Reason to Breathe
Barely Breathing
Out of Breath

Review:
All Emma wants is a quiet life and she is happy to live in the shadows, especially if it means she can stay out of her abusive aunt's way. She is counting down the days until she can leave her aunt and uncle's home and is working hard to secure a place at a college as far away from her them as possible. She keeps herself to herself and apart from her one friend Sara she tries to avoid social situations, it would just be too hard to explain the bruises otherwise and she since she isn't allowed out in the evenings unless its for something school related it hasn't been too hard to avoid going to the usual teen parties. Emma has never admitted how bad things really are to Sara but her friend has a good idea that Emma's home life isn't all that it should be. No matter how hard Sara tries to get Emma to open up she remains determined to just live through it until she can make her escape. When Evan moves to the area and starts at their school he quickly gets under Emma's skin but spending time with him is a huge risk and who knows what her aunt will do if she ever finds out about it.

I'm going to admit that I find books about domestic violence hard to read, most of the ones I've read have come across as unrealistic and felt like an inaccurate portrayal of the situation which has really annoyed me. Because of that I was a bit wary when it came to picking up Reason to Breathe but so many of my friends had given it positive reviews that I decided to take a chance and I'm glad that I did. Rebecca Donovan has created one of the most hateful fictional characters I have ever come across and I wanted to climb inside the book and give Emma's aunt a taste of her own medicine. If ever there was a character I could murder it is her and I'm really praying that karma is going to come round and bite her in the arse by the end of the series! The fact that I had such strong feelings about her just goes to show how invested I became in Emma and how much I wanted her to find a way out of her current situation.

I did struggle slightly with the fact that Emma refused to tell anyone what was happening to her because she didn't want her young cousins to lose their family. I would have preferred for her to have had a different reason but I've seen first hand how domestic violence victims can justify the craziest things because of the way they have been conditioned by their abusers so I don't think it was completely unbelievable. I did want to beg Emma to speak out though, not just for her own safely but also because it was such a horrific environment for her cousins to be raised in. Jack (6) and Leyla (4) were the cutest children and although their mother wasn't violent towards them they both saw how terribly she treated Emma and living like that is bound to have a long term emotional effect on them. I was almost as angry with Emma's uncle as I was with her aunt, as much as he wasn't Emma's main abuser and her aunt was careful to do things out of his sight there is just no way he didn't have a damn good idea of what was going on in his home and I was so livid that he didn't put a stop to it.

I want to mention how much I loved the fact that Emma had such a supportive friend in Sara and also in Evan once she got to know him. For once the rich, popular girl from school isn't portrayed as a complete bitch and Sara tried so hard to make things better for Emma, in fact I think without Sara's support Emma would have crumbled long ago. This story shows what a huge effect that domestic violence has not just on the victims but also on the people around them. Sara and Evan both had a good idea that Emma was in trouble but they didn't know how to help her. Emma kept things as quiet as she could and was too scared to tell either of her friends the full story which made it very hard for them to try and do anything for her. They both supported her as much as they could but there were times when they felt like they had to walk away from the situation for their own sanity. As much as I hated that Sara deserted Emma at one point I could completely understand why she felt that she had no other choice and my heart just broke for both of the girls.

Reason to Breathe is a fantastic start to this series and I'm relieved that the final two books are already available so I'm not going to have to wait to read them. Rebecca Donovan takes a really difficult subject but she tackles it with sensitivity. She doesn't downplay the things that Emma goes through, in fact the violence was quite hard to read about in places, but I never felt she added things for the shock factor. I think it is important for subjects like domestic violence to be discussed openly and books like this can only help make that happen so I'd like to thank the author for raising awareness on the topic.

Source: Received from Penguin in exchange for an honest review.