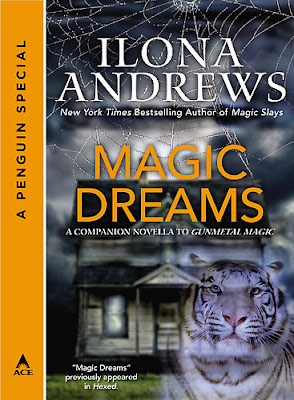 Alpha Pack leader Jim Shrapshire has always been the strong, silent type. But something has come over him--a magic force currently residing in one of the Pack's headquarters. Were-tigress Dali Harimau has always wished she could get Jim's attention--but now he needs her help.

Stricken with a magic-sickness, Jim needs Dali's flair for magic. And to save him, she must challenge a powerful, dark being to a battle of wits.

Includes an excerpt of Ilona Andrews's upcoming novel in the world of Kate Daniels, Gunmetal Magic, available in August 2012.

Review:
Magic Dreams is available to purchase as an ebook novella but was also included in the Hexed anthology. The story is set after Magic Bleeds and is told from Dali's point of view. We've already seen Dali's magic skills in previous stories but this time she faces her toughest challenge yet - saving the life of her Alpha Jim who is dying from a strange magical illness.

I already really liked both Dali and Jim but for some reason I'd never pictured the two of them together, I'm not sure why though because I think they're going to be a fab couple. Dali is such a fun character to spend time with, practically blind but determined to be independent I find it hilarious to think about her entering car races even though she can't see past the end of her nose. Having seen her drive Kate around I have to admit I wouldn't want to be her passenger though! I love the fact that she turns into a powerful white tiger but is a vegetarian who gets sick at the sight of blood. Yes, Dali definitely isn't your average shapeshifter but she is a lot of fun to be around and the scenes with her mother were hilarious.

Dali has been crushing on Jim for a long time but he is Alpha of the werecat clan and she knows he couldn't possibly be interested in her. In a lot of ways they are complete opposites, Dali is a crazy loose cannon with a chip on her shoulder and Jim is the sensible Alpha who is Curran's trusted right hand man and head of security for the entire clan of shapeshifters. He is over protective when it comes to his people and Dali drives him insane with the way she constantly puts herself at risk. She is the only one he can turn to in this situation though, the only competent (if erratic) magic user he has and someone he can trust to keep his predicament to herself.

We get to see a bit of a darker side to life in Atlanta in this story and discover the nasty underground characters who sell exotic animal parts on the black market. Dali must face these traders for a magical ingredient she needs to save Jim but as a rare white tiger she would make quite a prize if they were to capture her. I loved the plot of this story, it was fast paced and introduced some great characters (I can't be the only one who really hopes we're going to see more of her new friend as the series continues!). I would have really liked it to have been longer so we could have had a bit more of the romance that starts to develop between Dali and Jim though. I'm actually going to keep my fingers crossed that they are given a full length novel somewhere down the line. Either way Magic Dreams is a great addition to the Kate Daniels series and one that fans won't want to miss.