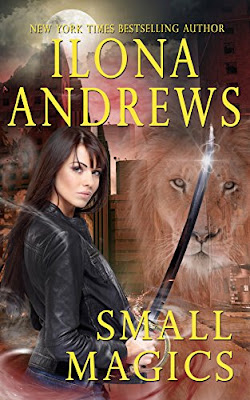 ***The stories in this anthology have been previously published***

Now collected for the first time, an irresistible compilation of five previously published stories by the bestselling author of the Kate Daniels series; including Kate’s very first meeting with Saiman, some related adventures, and two unforgettable ‘outside’ excursions.

A QUESTIONABLE CLIENT –
In this ‘intro’ to the Kate Daniels world, we meet the extremely ‘shifty’ Saiman for the very first time, when Kate takes on the task of serving as his bodyguard to protect him from some very determined—and dangerous—Russian wizards.

RETRIBUTION CLAUSE –
Saiman’s cousin, Adam—a frost giant and also an insurance adjuster—and his enigmatic partner, Siroun, set out on an impossible mission to enforce a client’s Retribution Clause; that is, to kill the person who killed her. But is their target even guilty? Magic and mayhem and a little personal chemistry will reveal the truth!

OF SWINE AND ROSES –
A young adult story about a girl, a pig, some magic, and the worst date ever.

Chad Thurman is a thug, who carries brass knuckles in both pockets and lays magic traps for intruders into "his" neighborhood. The last thing Alena Kornov wants to do is to go on the date with him. But when her family pressures her, she can't say no. Now the ice-cream is absent, the pig is running for its life, and we won't even mention the dead guy...

GRACE OF SMALL MAGICS –
Grace has always known she wasn’t like everyone else and that her family has magic abilities. After flying to meet the head of Clan Dreoch in order to fulfill her families’ “duties” as servants, Grace finds herself in the middle of a mage clan war…

MAGIC TESTS –
A short story in the Kate Daniels universe. Kate recruits her teenage ward, Julie, to search out a missing student whose location spell has her hidden somewhere on campus…

Review:
I've read and reviewed a lot of these stories separately or as part of other anthologies but it never hurts to have everything all in one place so I'm going to post those reviews again here. Three of the stories in this anthology are set in the Kate Daniels world but two are completely standalone (and one of those was completely new to me).

A Questionable Client is a prequel short story for the Kate Daniels series and shows a bit of Kate's history with the Mercenary Guild and we see her first meeting with shape shifter Saiman. This is a great introduction to the series and I loved finding out more about Saiman who is a character that intrigued me in the first book Magic Bites. Although short this story is full of humour and was a quick, enjoyable read that has reminded me how much I liked the first book in this series and made me keen to continue reading Kate's story.

This is set in the same world as the Kate Daniels series but we don't get to see any of the characters we already know and love, we do get to meet Saiman's cousin though so there is a link there. I really loved Adam, as much as I find Saiman's constant body swapping amusing it is also kind of creepy so it was interesting to see how different Adam is and how comfortable he is in his own skin. Adam and his partner, Siroun, work as insurance adjusters which sounds boring on the surface but in reality means they are charged with investigating any suspicious deaths among their clients. In the case of murder victims it is up to them to dispense justice to their killers. Although this is a farily short story there is a mystery to solve and I enjoyed getting to meet these characters and explore this world further. There is definitely some great potential for these two and I'd love to read more stories about them in the future.

Of Swine and Roses:

This short story introduces us to teenager Alena Kornov who is under pressure from her family to date Chad Thurman, a boy from one of the local families who they need a favour from. Alena has absolutely no interest in Chad but her mother is a master of guilt manipulation and Alena ends up agreeing to her demands. What follows is an absolutely hilarious first date from hell. I'm not going to say any more than that so you'll just have to read it for yourself but it was definitely a fun read.

It's official, team Andrews can do no wrong! Even in a 23 page short story they manage to hook me completely in and get me fully invested in the characters they've created. I actually would have loved to see this turned into a full length novel but it was surprisingly satisfying for such a short read. You can definitely tell this is one of the stories that eventually developed into the Hidden Legacy series, it's totally different worlds and the rules of magic aren't quite the same but there are plenty of similarities there too.

This is another story that shows the beginnings of the ideas behind the Hidden Legacy series, Grace knows her family is different and that she has a magical ability but her family have done their best to keep her untrained and under the radar. What she doesn't know is that her family owe a huge debt to one of the magical elite families due to a long running vendetta and now Nassar, the head of the other family, is calling in their debt. This story has plenty of action and some great characters alongside a satisfying romance. There were a lot of things that reminded me of Nevada and Rogan from the Hidden Legacy books and reading this left me itching to start a HL reread - AGAIN (seriously I can't get enough of those books!).

I've always quite liked Julie's character, she can be a little annoying at times but I think she is a fairly typical teenager in that regard, and it was nice to see a story from her point of view. Although this story isn't essential reading as part of the series because it doesn't really effect the ongoing story arc it was nice to get to know Julie a bit better and I'd actually like to see more from her POV in the future. We've all seen how much Julie hates the boarding school that Kate sent her to and now she's home and living in the Keep she seems to think she can get away without going to school at all. Kate has other plans for her though and she has a very clever way of getting Julie to go along with them. We are introduced to some great new characters but the one I was most excited about seeing again was Yu Fong (you may remember him from Dali's short story Magic Dreams). I was already hoping he'd end up being a major character in the series and now I'm thinking he's more likely to re-appear thanks to his friendship with Julie. I loved getting to see Julie grow up a bit and actually work out a way to use her ability to help someone else and I'd definitely like to see her get her own book or spin off series in the future.