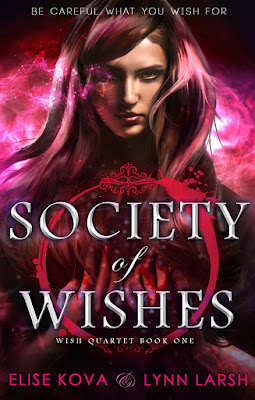 BE CAREFUL WHAT YOU WISH FOR.

Josephina Espinosa makes her living as a hacker-for-hire in the Lone Star Republic, a remnant of the fractured U.S.A. That is, until the day she and her best friend are gunned down in a government raid.

With her dying breath, Jo uses magical lore passed down from her grandmother to summon a wish-granter. Her wish? To save her friend’s life. Except wishes have costs, and for Jo, the price is the erasure of her entire mortal existence.

Now, as the most recent addition to the mysterious Society of Wishes, Jo must form a new “life” alongside the seven other members, one of which being her savior himself. Living as an occupant of the Society’s lavish mansion should be quite the perk, but while it is furnished with everything its inhabitants could possibly need, it lacks one thing—freedom.

Her otherworldly identity crisis takes a backseat, however, when Jo learns that the friend she sacrificed everything for is headed down the same path to ruin. Jumping in head-first, Jo uses her newfound magical abilities to protect him, only to realize that the ripples of her actions have far-reaching consequences. When the Society’s aloof leader Snow decides to give her a taste of his own ancient magic, Jo discovers that there are threads woven into the tapestry of her new reality that reach far beyond the wishes she is now required to grant. Ones that, if tugged on, could mean the unraveling of the world itself.

Review:
Jo's world is turned completely upside down when she uses her last breath to make a wish to save her best friend's life. Saving her friend has the unexpected consequence of also saving her own life but not the same version she used to live. Now her family and friends have completely forgotten she ever existed and she finds herself the newest member of the Society of Wishes, a group of people who use magic to grant the wishes of anyone who knows the correct ritual. As Jo struggles to come to terms with everything that has happened to her she realises that the best friend she gave up everything for is about to walk into the same trap she already saved him from once. Refusing to let her sacrifice be in vain she breaks all the rules to try and save him and ends up causing more trouble than she could possibly have imagined.

Society of Wishes is the first book in a new series by Elise Kova and Lynn Larsh, the idea of the Society is a really intriguing one but I have to admit I struggled a little with the world building. Jo is taken away from everything that is familiar with and thrown completely in the deep end within the Society, nobody takes the time to explain anything to her an it leaves both her and the reader very confused about what is happening. The way the other characters just tell Jo not to do things but don't explain why leads her to make some very stupid mistakes but that's pretty understandable when nobody bothers to talk through the consequences of her actions. If she was working alone that wouldn't be so bad but she has a lot of help from another member of the Society, one who should know exactly how badly her plans could screw up things for everyone else and I just couldn't understand why he was willing to go along with her.

We're introduced to a diverse group of characters and I'm definitely interested in learning more about all of them but I also really need some more answers about how the Society works and how it came to exist in the first place. I think because I didn't really understand why things happened I found it harder to connect to the story and the characters but I'm hoping that will get easier as the series continues.

One thing I really wasn't sure about here was the romantic element though. There are not one but two potential relationships thrown out there but they both pretty much came out of nowhere, there isn't much in the way of a slow build up and that made Jo's feelings hard to believe. The sex scene was well written but it felt out of place and didn't really fit in with the rest of the story, it felt more like an afterthought added to make the story fit the NA category and it could easily have been left out. I tend to prefer some romantic tension that takes a while to reach a payoff in urban fantasy, when you have a series you don't have to rush to fit it all in the first book and it can be better to tease your readers a little and keep them waiting.

I think this series has a lot of potential but unfortunately for me the first book didn't quite live up to that. It can be really hard to introduce a whole new world in just one book though so I'm always willing to give a series with an interesting premise at least two books to fully catch my interest. I'm hoping that things will start to fall into place in City of Ashes and I'm curious to see what will happen next.