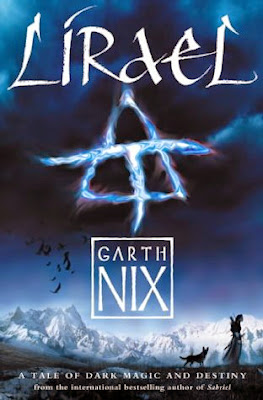 When the future is hidden, who holds the key to destiny?

Lirael has never felt like a true daughter of the Clayr. She doesn't even have the Sight - the ability to See into the present and possible futures - that is the very birthright of the Clayr. Nonetheless it is Lirael in whose hands the fate of the Old Kingdom lies, while Abhorsen Sabriel is engaged in conflict elsewhere.

As an ancient evil casts its shadow - one that opposes the Royal Family, blocks the Sight of the Clayr, and threatens to break the very boundary between the Life and Death - Lirael undertakes a desperate mission.

With only her faithful companion, the Disreputable Dog, to help her, Lirael sets out upon a perilous journey and comes face to face with her own fate . . .

Review:
I have loved Garth Nix's Old Kingdom series for years now, it's one I've read numerous times over the years and I only love it more with every reread. I remember being slightly disappointed when I first found out that Sabriel wasn't the main character again in Lirael but that feeling didn't last long and I quickly grew to love Lirael just as much as her predecessor. Changing points of view was a great way for us to learn more about the mysterious Clayr, the seers who use their abilities to protect the Old Kingdom from threats and I really enjoyed that change of pace.

Lirael is set around 20 years after the ending of the first book, Sabriel and Touchstone are now married and they are the current king and queen of the Old Kingdom. Both of them are working hard to undo the damage caused by the necromancer that they fought in the previous book but there are new enemies on the horizon making things complicated. This story is told from two different points of view, first you have Lirael, a young girl who was born to the Clayr but is yet to come into her Sight, and second is Sabriel and Touchstone's youngest son Sameth.

Lirael has never really felt at home amongst the Clayr, she is very different from them in both looks and temperament and the she is embarrassed by the fact that she has never come into her Sight. She spends a lot of her time alone and isolated just dreaming of becoming a "proper" Clayr. When she is offered a job at the Clayr library she finally finds a place where she feels at home, she loves learning and is fascinated with learning about Charter Magic, something she seems to be quite skilled at. When she manages to bring the Disreputable Dog to life she finally has a friend, someone to talk to and share adventures with. Lirael may be unhappy not to have been given the Sight but she eventually discovers that she has an even rarer ability, one that could help her save the Kingdom.

Sameth is supposed to be the Abhorsen in waiting but after an incident where he was badly injured by a necromancer he is absolutely terrified of entering death. Until recently he has been studying at a boarding school on the other side of the wall so he has had no need to use his magic but now he has returned to the Old Kingdom he is expected to begin his training and he doesn't know how to tell his parents that he is too frightened to accept his role. Sam is depressed and miserable but worried about disappointing his parents and he doesn't know what to do with himself. The only thing keeping him going is an upcoming visit from his best friend so when Nicholas goes missing Sam sets out to try and find him and it is on that journey that his paths cross with Lirael's.

This book is a real coming of age story for both main characters, they both have different inner demons to fight and at times they are both drowning under the weight of expectations that other people have of them but along the way they really realise their own strength and start to come into their own. I have to admit that I found Sam a bit irritating at times, he comes across as younger than his age and there were times I wanted to shake some sense into him but he does make some huge changes by the end of the book and he really grew on me. Lirael was easier to like from the beginning but I am definitely invested in both of their journeys. As much as I love Lirael and Sam I think it is the Disreputable Dog and Mogget who steal the show for me, their characters are just fantastic and I'm also desperately curious about what is happening with Nicholas. It's been so long since I read this series last that I'm having trouble remembering how things play out so I'm excited to continue the series and read Abhorsen.