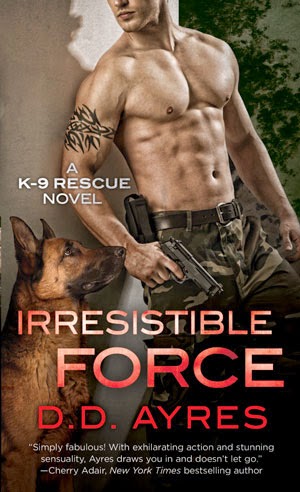 When adrenaline runs high, so does the force of desire . . .

For Shay Appleton, it’s love at first sight when a gorgeous stray dog is brought into the animal shelter where she works. She just knows he’ll make a terrific watch dog—and with an abusive ex who won’t let go, she needs all the protection she can get. But Shay never suspected that her new pet is actually a trained police K-9 named Bogart—until Bogart’s even more gorgeous, human partner shows up on her doorstep.

Officer James Cannon is one tall, strong alpha male who’s convinced that Shay stole his dog. But once he gets closer to the suspect, he realizes that this stubborn, independent woman not only needs a guard dog, she needs James as well. It seems that someone from her past is stalking her, and threatening her life. When danger meets desire, will James risk his career and his best friend…to protect the woman who’s stolen his heart?

Review:
Irresistible Force is the first full length novel in D.D. Ayres' K-9 Rescue series, there is a prequel novella, Necessary Force, but there is no crossover of characters between the two stories so it isn't essential to have read the prequel before you pick up this book.

Shay fell in love with Prince at first sight - the moment he was brought into the animal shelter where she works she knew he was the perfect dog for her and she had to take him home with her. They couldn't be happier together and Prince is a brilliant watch dog, something she desperately needs when she is living in fear her ex boyfriend will catch up with her. Unfortunately Prince wasn't just a normal abandoned dog, he was a stolen police dog and after weeks spend searching his handler James has tracked him down. James is convinced that Shay stole Bogart and he's here to get his partner back but it doesn't take long before James realises that Shay isn't a thief and she's in desperate need of their protection from the stalker who is determined to make her life a misery.

I'm a sucker for stories that feature animals as one of the main characters and in this case Bogart/Prince absolutely stole the show. I had a lot of fun watching his interactions with both Shay and James but I also really enjoyed learning more about how K-9 dogs are trained and how strong the relationship is between the dogs and their human handlers. James and Bogart are a perfect team, they read each other's body language and both have complete trust in each other which was portrayed really well in the story. James was a great guy, definitely an alpha male and very protective with it he likes to look after the people who are close to him. He quickly realises how close Shay and Bogart are and he understands that she needs protection even if she does struggle to come out and ask for help. Shay has been through a lot and her past experiences have made her wary of men and the police so she isn't sure what to make of James. She has a habit of pushing him away but luckily he's even more stubborn than she is and he is determined to get through her defences.

Irresistible Force is a story that is full of action, there isn't much mystery when it comes to the identity of the bad guys but they did surprise me with some of their actions. The romance was enjoyable and I loved the K-9 aspect to the story. I'll definitely be checking out the next instalment to the series when it releases next year.