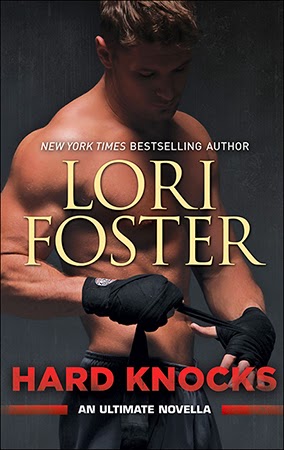 Power. Brute strength. Unforgettable moves. It’s no wonder Harper Gates hasn’t been able to get her fling with Gage “Savage” Ringer out of her head. Months have passed since she laid eyes—or any other body parts—on him. Months without a word of contact… until, sidelined by injury, he comes back to town.

Staying focused on his training seemed like a smart move to Gage, even if he thought about Harper every day. Seeing her again only makes it clear how much is at stake. He’s got one night to earn back her trust. One night to show her that behind his breathtaking skill and ripped body is a man who’ll give her everything she needs.

Review:
Hard Knocks is the prequel novella to Lori Foster's Ultimate series and it was definitely enough to make me want to spend more time with this group of characters. The story introduces us to a group of fighters who all train at the same gym, most of them are in different weight ranges so rarely compete against each other and there is a great bond between them all. The fighters are very supportive of each other and I enjoyed the banter between them.

This particular story is about Gage and Harper, the couple have known each other for a long time and they were on the verge of beginning a relationship when Gage moved to America to train for an upcoming fight. Harper spent weeks waiting for him to contact her and was hurt that he was able to forget her so easily. Thanks to an injury Gage is back in the country and now he's not focused on the fight he plans to dedicate himself to Harper so they can finally get their relationship started.

This is a fairly short story (around 100 pages) so there isn't a lot of time to focus on the romance but because there is obviously so much history between Gage and Harper things didn't feel rushed or forced. They have great chemistry and I enjoyed the banter between them both as well as seeing the other fighters teasing them. It seemed like everyone else had seen their relationship coming and the only ones who weren't sure of the other's feelings were the couple in question. I liked what we've seen of the gym and the way the fighters go out of their way to give back to the community by helping troubled teens and I'm definitely looking forward to getting to know each of the guys better. I already have a feeling that Armie is going to be my favourite but I guess I'll have to wait and see if that's right or not.