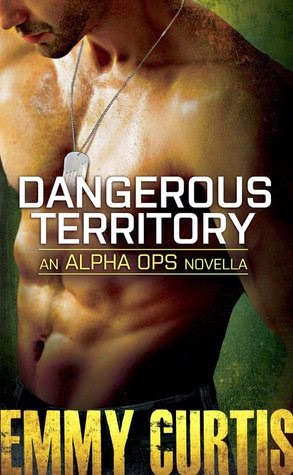 Flirting with danger is reporter Grace Grainger’s modus operandi. But she’s learned the hard way not to grow attached to the soldiers she’s embedded with in Afghanistan. To escape from her pain and loneliness, she fantasizes about the hot night she spent with a gorgeous stranger three years before in D.C. Grace never thought she’d see him again—let alone need him to rescue her . . .

Air Force Master Sergeant Josh Travers knows journalists are nothing but trouble. So when he has to risk his team’s lives to save some reporter who’s been separated from her patrol, he’s not happy—until he recognizes her stunning eyes and delicious curves. Josh has never wanted a woman like he wants Grace. He needs her—even in an Afghan cave with a sandstorm and enemy troops closing in. This might be the end for both of them—or one hell of a beginning.

Review:
The first time Grace and Josh met they were strangers in a hotel bar both looking for a night of passion to help them forget their troubles, they share an intense night but with no expectations of ever seeing each other again and both walk away happy afterwards. Three years later and they both still remember that night fondly and wonder if their paths will ever cross again. Reporter Grace is now embedded with a military unit in Afghanistan reporting the realities of war, when a routine patrol goes horribly wrong she finds herself stranded alone and defenceless behind enemy lines. Josh is part of the pararescue team sent to rescue her and he's not happy about risking his life for a reporter who had no business being out in the field in the first place. It isn't until he arrives that he realises who Grace is and no matter how much he hates reporters the chemistry between them is still burning as hot as the night they met. Can he get her to safety and if he does will he be able to let her walk away from him a second time?

Dangerous Territory is Emmy Curtis's debut and a great introduction to her new Alpha Ops series. The story has just the right blend of action, suspense and danger combined with a nice amount of romance and a couple of hot sex scenes. I have to admit that as hot as the first sex scene was I did find it a little unbelievable that they'd get down and dirty in a cave when the Taliban are outside searching from them and that did reduce my rating a little, however their second encounter was much more appropriate and therefore more enjoyable.

I liked both of the main characters, I enjoyed seeing Josh get over his prejudice against reporters and realise that Grace wasn't just trying to make money by writing sleezy tabloid pieces. He had good reason to be suspicious because of the actions of others but he was quick to realise that he couldn't accuse her of the same thing. Although the romance develops fairly quickly I can forgive that in a novella and it didn't worry me too much in this case. I have to say if this is what Emmy Curtis can achieve in a novella I can't wait to see what she does with a full length book and I have very high expectations for the next story Over the Line.