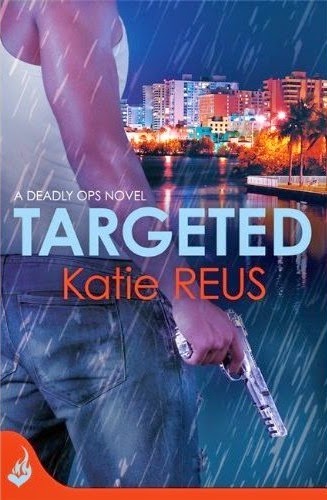 Former Marine sniper Jack Stone has a new face to go with his new identity, but he can't escape the tortured memories of the woman he left years ago. Then an undercover assignment in Miami puts him close enough to touch her - if only she wasn't under suspicion.

When Sophie Moreno uncovers evidence linking her employers with arms smuggling - and worse - she realises the only person she can trust is a stranger with hauntingly familiar eyes.

As Sophie questions her intense attraction to this man and Jack struggles not to blow his cover, they must race against the clock to stop terrorists from killing scores of people - starting with them.

Review:
When Jack was in the Marines he was recruited to work for a top secret national security agency but he was forced to leave everything he knew and loved behind him. Given a new face and a new identity the man he once was is nothing but a distant memory. There is only one person he was never able to leave completely in the past and that is his childhood sweetheart Sophie, the only woman he ever loved. Now Sophie has come under suspicion and may be working for a terrorist organisation and Jack is sent in to uncover the truth. Can he keep his true identity a secret from the woman he loves or will his cover come crashing down around him?

Targeted is the first book in Katie Reus's Deadly Ops series and it was a fab and fast paced story. The action kicks off right from the beginning and we are kept guessing right the way through. Jack is a fantastic hero, strong and protective he will do whatever it takes to keep Sophie safe and to prove her innocence. He hated walking away from her but he did it for her because he thought it was what she wanted and he's never forgotten her, keeping an eye on her from a distance to make sure she is safe and happy. Sophie loved Jack more than anything, they met when they were teenagers who were put into the same foster home and they had planned to make a life together as soon as they were both old enough to leave but one terrible, life changing event, scarred Sophie and she blamed Jack for not being there to protect her. Although she pushed him away she never expected him to be killed in action on his first tour with the Marines and she's never forgiven herself for not reconciling with him before he died. She was heartbroken when Jack died and he has become the guy that she measures everyone else up against but nobody has ever come close.

The moment Sophie meets Jack again there is something familiar about him but she knows he can't possibly be the boy she once loved. The more similarities she sees between Jack and the boy from her past the more she starts to question her own sanity but it doesn't take long for her to uncover the truth. Jack and Sophie have fantastic chemistry and a strong connection built on their shared past. Sophie in particular has a lot of issues to overcome before she lets him back into her heart but she is so relieved to find out that he is still alive that she finds it easy to forgive his past actions.

I loved the romance between these two, there are some very sweet moments and the chemistry is explosive. I also really enjoyed the action, there is a lot going on and Sophie proves herself a capable heroine who is smart enough to look after herself. I really liked her for her strong sense of integrity and I enjoyed seeing her work alongside Jack to figure out what was going on in the company she has worked so hard for. Overall I thought Targeted was a really enjoyable read and this is definitely a series I'm looking forward to continuing.

Source: Won in a giveaway from Headline Eternal