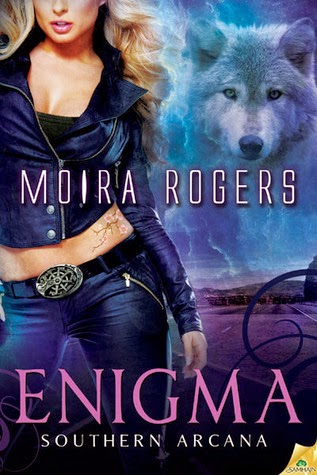 Anna Lenoir has always fought. First to escape her broken childhood, then to prove a female shapeshifter can stand shoulder to shoulder with the men. Now she fights for money, and her reputation is as legendary as her stone-cold heart. She’s never met a man she couldn’t walk away from.

Bounty hunter Patrick McNamara has a scary reputation of his own, along with mysterious powers linked to his many tattoos. On the clock, they’re the perfect supernatural-crime-solving team. After hours, she’s ready to rock his world. But Patrick won’t settle for just her body, and Anna’s better at breaking homes than making them.

When the heir to the Southwest council goes missing, their combined skills are the best chance of averting a territory war. But the hunt will drag them through the most vulnerable parts of their broken pasts. Daring to risk her heart might be the first fight she loses, and the stakes have never been higher.

Because Patrick will sacrifice anything for her... even his life!

Review:
I love the Southern Arcana series but it was a long wait after reading Impulse for Enigma to be released and I was a bit nervous about picking it up in case I'd forgotten what was going on. Thankfully it was really easy to jump back into this world and seeing all the characters I love was like catching up with old friends.

Fans of the series already know how much Patrick has suffered and I've been desperately waiting to finally see him get his happy ending. Patrick feels a lot of guilt because he wasn't able to save his brother's life, ever since Ben's death Patrick's life has been on hold and all he's been interested in is getting revenge. Now he's a damaged shell of his former self, the tattoos that bind his powers have been nearly destroyed and his magic is now eating him from the inside out leaving him unstable and out of control. As much as Patrick is struggling with his guilt and grief there is one woman who makes him dream of more and there is something about Anna that he finds impossible to resist.

Anna has never had the support of a family who loved her, she has always been alone and she's never really learnt to rely on others. As much as she is attracted to Patrick she is terrified of getting hurt by giving into her feelings. She is happy for them to have a no strings attached affair but she can't bring herself to risk more than that. I have to admit I found Anna a little frustrating at times, Patrick is such a fab character and I was annoyed that she kept pushing him away but I could understand where she was coming from and I did enjoy seeing him prove her fears were unfounded.

This is a romance between two emotionally damaged characters and it's all the more rewarding seeing them grow stronger by each other's sides. Alongside the romance (and incredibly hot sex!) this series always contains plenty of action, a good dose of mystery and the camaraderie amongst a group of characters who know each other well. We get to catch up with old favourites and see how they're getting on which is always nice. I can't seem to find any information about further books in this series but I really hope this isn't the last we've seen of the Southern Arcana world and if Moira Rogers does write more they will definitely go straight to the top of my wish list!