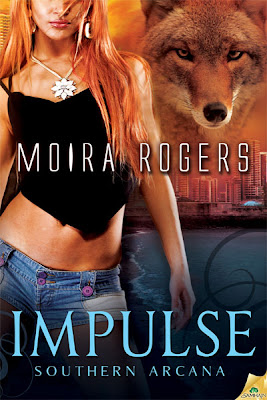 Her submission can heal him. His dominance can free her.

Sera Sinclaire is a New Orleans rarity: a submissive coyote trapped in a town overrun by dominant shapeshifters. Worse, she lacks the willpower to deny the alphas-in-shining-armor who need her soothing presence, even when their protectiveness threatens to crush her hard-won self-reliance.

The only shifter she doesn’t want to push away is Julio Mendoza, a wolf so dominant he’s earned a place on the Southeast council.

Julio doesn’t have the luxury of indulging in the vacation his psychic shrink insists he needs. He can’t turn his back on responsibilities he’s beginning to wish he’d never shouldered. When an obsessive ex endangers Sera, though, instinct drives him to get her out of town. Watching her come to life outside the city makes him feel like he’s finally done something right, and her touch ignites desire he doesn’t want to ignore.

But soon, lighthearted flirting becomes a dangerous game of seduction, where every day spent falling into each other is another day avoiding the truth. Sera’s ex isn’t the only one who’d disapprove of their relationship. There are wolves who would kill to get Sera out of Julio’s life—starting with his own blood kin.

Warning: Contains endless summer road trips, family drama, redneck werewolves, sexual power games and a taboo love affair between a submissive coyote who’s among the last of her kind and a dominant wolf who loves his heroine’s ass. Literally.

Review:
I am a huge fan of the Southern Arcana series, in fact I love pretty much everything that the awesome duo behind the name Moira Rogers write so of course I was excited to get my hands on Impulse. I have to say I think this was my favourite instalment to the series so far - I definitely have a new favourite couple in Julio and Sera!

As a submissive coyote shifter Sera has the ability to sooth the dominant alpha werewolves in her life. Just spending time with her calms them and she instinctively wants to do their bidding even when it goes against her own wishes. Having escaped her dominant and abusive ex husband the last thing she wants is to let someone else have control over her future, she is determined to be independent and stand on her own two (or four!) feet for once. Although she longs for the freedom to make her own choices deep down she loves her submissive side, she is just frightened of having her trust abused again by letting the wrong person into her life and into her heart.

Julio is an extremely dominant and sexy alpha werewolf who is strong enough to have become a member of the Southeast council. It has been 13 months since the torture he suffered when trying to protect his friends in the last book and he is still trying to deal with the emotional effects that has had on him. I absolutely fell for Julio, he pushed all the right buttons for me and I thought he and Sera were perfect together. I loved the way their personalities complimented each other, I loved that although Julio wanted to protect Sera he also wanted to give her the confidence to achieve her dreams and I particularly loved the fact that they're both just a little bit kinky!

One of my favourite quotes from the book:
"You're a dirty bastard" "Are you complaining?" "No"

I have to confess that I wouldn't be complaining either if I was Sera - she is one lucky, lucky coyote! The tag line from the story "Her submission can heal him. His dominance can free her" sums up their relationship perfectly.

It was also great to have a chance to catch up with some of the other characters from the series and see how they are getting on now. There are also some really interesting developments with the Southeastern council and the Conclave that are going to have some huge knock on effects in future books. My only disappointment with this series is that I now have to wait again for the next instalment - I just wish I could have a new book every month! If you're new to the series then I would highly recommend reading them in order starting with Crux - this is one of my favourite paranormal romance series and one I think everyone should be reading. Fans of the series are just going to love Impulse!