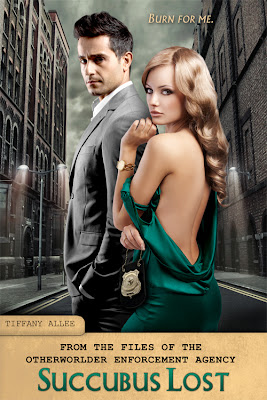 Someone is kidnapping and incinerating otherworlders beyond recognition, and detective Marisol Whitman, a succubus, races to find the murderer before he claims another victim. But her pursuit is derailed when her responsible younger sister vanishes. Marisol suspects foul play and enlists support from an unlikely source: an agent from the Otherworlder Enforcement Agency, Valerio Costa.

When the trail pointing to everyone from vampires to witches dries up, Agent Costa admits to knowing more than he’s shared. Marisol’s sister’s kidnapper harnesses more magic than she can imagine—and they’re running out of time. To find her sister before her powers are drained and twisted beyond recognition, Marisol must connect the dots between cases and put her trust in Costa, a salamander who may burn her before she can solve either case.

Review:
I really enjoyed the first book in this series so I was looking forward to catching up with the characters and revisiting the world in Succubus Lost. I was actually a little bit disappointed when I realised that the story doesn't continue from previous heroine Mac's point of view and that this is actually Marisol's book. I really liked both Mac and Aidan from the first book and although Marisol and Valerio were OK I found them harder to connect to and didn't really find their relationship as believable.

If you've already read Banshee Charmer then you will probably remember Marisol as Mac's colleague from the freak squad. She has been asked to work alongside Valerio, who is an agent from Otherworlder Enforcement Agency, while he investigates a spate of succubus disappearances across the country but the case becomes a lot more personal when her sister becomes one of the missing women. Marisol is determined to do whatever it takes to find her sister, hopefully before she can be murdered, but the closer they get to uncovering the truth the more dangerous things become.

Marisol has always hated the way men look at her as just a beautiful face, as a succubus she knows her beauty is just nature's way of helping her attract men to feed on. For once she wants someone to see past her looks to the intelligent woman underneath and appreciate the fact that she has brains as well as beauty. Valerio doesn't trust Marisol or the feelings she brings out in him, he is wary that she might be using her succubus abilities to influence him. He has been hurt in the past and has no intention of letting anyone close enough to break his heart again. As they work against the clock to solve the case they become more connected but can they break through the misunderstandings between them to see if there is a chance of building a relationship?

Although I didn't enjoy Succubus Lost as much as I liked Banshee Charmer it was still a fun read and I liked spending more time in the world that Tiffany Allee has created. It is nice to come across such a wide range of different paranormal creatures and I'll be interested to see who will get their turn in the spotlight next. I did feel that the mystery was a bit too easy to resolve this time around which was a shame because it made the story much more predictable. I would also have liked to have seen more time spent developing the relationship between Marisol and Valerio, things between them happened far too quickly and it just felt like they were forced together in order to provide a happy ending to the book. In spite of these problems I will still keep an eye out for the next book in the series and am hopeful that it will be as good as the first story was.