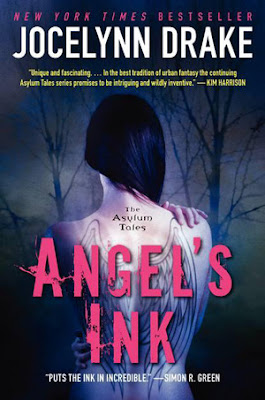 Looking for a tattoo - and maybe a little something extra: a burst of good luck, a dollop of true love, or even a hex on an ex? Head to the quiet and mysterious Gage, the best skin artist in town. Using his unique potions-a blend of extraordinary ingredients and special inks-to etch the right symbol, he can fulfil any heart's desire. But in a place like Low Town, where elves, faeries, trolls, werewolves, and vampires happily walk among humanity, everything has its price.

No one knows that better than Gage. Turning his back on his own kind, he left the magical Ivory Tower where cruel witches and warlocks rule, a decision that cost him the right to practise magic. And if he disobeys, his punishment-execution-will be swift.

Though he's tried to fly under the radar, Gage can't hide from powerful warlocks who want him dead - or the secrets of his own past. But with the help of his friends, Trixie, a gorgeous elf who hides her true identity, and a hulking troll named Bronx, Gage just might make it through this enchanted world alive.

Review:
Gage was trained from a young age to become a warlock but in a world where the warlocks and witches rule the other races with an iron fist he didn't feel comfortable with the way his mentor and the other inhabitants of the Ivory Towers lived their lives. Gage doesn't believe that the ability to harness magic makes the warlocks any better than anyone else and he hates the way they treat humans and other supernatural beings with contempt and as little better than insects to be crushed at will. He is the only apprentice warlock who ever chose to leave the Ivory Towers and return to living amongst humans and he was only allowed to leave under the condition that he never uses his magic again except in self defence. Even then the warlocks aren't happy that he decided to leave and he knows that they are constantly watching him and waiting for him to make a mistake.

All Gage wants to do is live his life in peace and remain under the radar of the warlocks. He has become one of the most successful tattoo artists in the area and is skilled at creating potions to add to the ink he uses in his art. If you want a tattoo that will bring you luck or make you attractive to the opposite sex then Gage is the person you want to see. His colleagues, troll Bronx and elf Trixie, are both equally skilled artists and potion stirrers but both have their own secrets and reasons to keep to themselves. It seems like their pasts might be about to catch up with them though so can they work together to keep their freedom?

I really enjoyed the two prequel novellas for Jocelynn Drake's new series so I couldn't wait to start reading the first full length novel Angel's Ink. I was looking forward to learning more about Gage's background and to spending more time at the tattoo parlour with him, Bronx and Trixie. For those who haven't read the prequel novellas I do think that Angel's Ink can be read on it's own, the prequels basically show how Gage met each of his fellow tattoo artists and how they came to work at his tattoo parlour The Asylum. They are fun reads but this information isn't necessary to follow the story.

I have to admit that after really loving the prequels I ended up finding myself slightly disappointed with Angel's Ink. I had hoped to spend more time getting to know Gage, Bronx and Trixie - we had been given hints of secrets that they were all holding back and I wanted to learn more about them. Although we do uncover more about Gage's past and learn who Trixie is hiding from I was sad that we didn't get more of Bronx. In fact his role in this book was mainly backing up Gage when he got himself into various different kinds of trouble and when he wasn't running to the rescue he just kind of disappeared into the background. It was a shame because I really liked Bronx in the prequels and had hoped to learn more about him. I also have to admit that I wasn't a fan of the romance between Gage and Trixie, it happened too quickly and ended up feeling forced.

When I read urban fantasy I'm not looking for something that focuses on the romance - I'm more interested in a fast paced plot and really getting to know the characters and the world that the author has created. Yes a lot of my favourite urban fantasy series do contain a hint of romance but most of the time it has that kind of will they / won't they theme running through at least the first few books and I really enjoy that kind of tension between the characters. In the case of Gage and Trixie there was no tension, everything flows together too easily and at times felt a bit more like I was reading a paranormal romance. I just didn't feel invested in either of the characters and didn't believe that there was any real emotional connection between them, definitely not enough for them to become a couple.

The plot is fast paced but at times it gets a little too complicated - Gage can't go a chapter without finding some new kind of trouble to get himself into! This was amusing at first but it got to the point where I just wanted some kind of resolution to the problems he already had rather than for him to dig another hole to fall into. Some of these issues are dealt with by the end of the book but we are definitely left with questions for future books in the series to answer. In spite of my complaints I did still enjoy the story, the world that Jocelynn Drake has created has a lot of potential and I hope that we will see a lot more time spent developing the characters and the background as the series continues. Gage is a likeable guy but I want to see a lot more of Bronx in future instalments and I'm quite excited to get to know new character Sofie who doesn't make her appearance until nearly the end of the book.