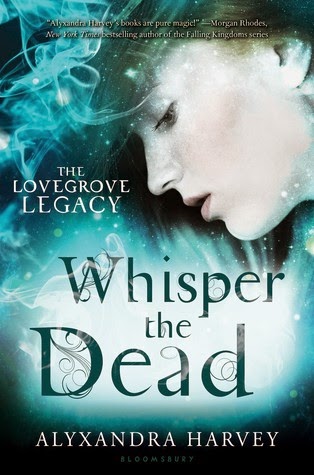 Gretchen is struggling with her newfound gift as a Whisperer; the constant buzzing in her ears from detecting spells is more frustrating than fun, especially when she is spending time with one of the Order of Iron Nail's Keepers, the icy but strikingly handsome Tobias Lawless. But while Gretchen tries to hide the truth and resolve her feelings for him, London fades from beautiful and bustling to deathly silent ...Something evil is once again menacing Mayfair, and Gretchen and her cousins must use their powers to prevent a horrible sacrifice.

This second book in the Lovegrove Legacy trilogy is full of dark twists, spellbinding suspense and sweeping romance - perfect for fans of Cassandra Clare, Lauren Kate and Ruth Warburton.

The Lovegrove Legacy:
A Breath of Frost
Whisper the Dead
In A House Made of Bones and Teeth (Novella)

Review:
Since cousins Gretchen, Emma and Penelope discovered they were witches they have been on a sharp learning curve and they're still trying to figure out how to use their gifts. After Emma accidentally released the Greymalkin sisters in the previous book all three of them are under constant watch by the Order of the Iron Nail and it's making life impossible. When strange magical events begin to occur around Mayfair the girls find themselves at the centre of suspicion but Gretchen has never been one to sit back and wait for things to happen so she becomes determined to uncover what is really going on and find a way to prove their innocence and to keep London safe.

Whisper the Dead is the second book in Alyxandra Harvey's Lovegrove Legacy trilogy and it picks up the story right where the first book, A Breath of Frost, left off. Although we still get to see plenty of both Emma and Penelope this is definitely Gretchen's story and I really enjoyed getting to know her better. Gretchen is the most outspoken of the cousins, she is very much a tomboy who has always wanted to do everything that her twin brother Godric does. She hates the restrictions placed on women by society and refuses to follow the rules when she could have much more fun dressing as a boy and going out on an adventure. I loved that rebellious side to her and enjoyed seeing her take such an active role in the investigation.

As a Whisperer Gretchen has the most difficult ability of all of them since she constantly hears all the previous spells any other witch have ever cast on repeat inside her head. It means she has a great depth of knowledge at her disposal but trying to pinpoint the spells she actually needs is nearly impossible and causes her a great deal of pain. Her gift may cost her but if she can figure out how to use it safely she will be a formidable ally and she wants the freedom to work alongside the Order. Gretchen is brilliant at escaping from her Order babysitter, much to Tobias's frustration and she definitely manages to keep him on his toes with her unpredictable behaviour which was fun to see.

As much as I enjoy the hint of romance between Gretchen and Tobias I really appreciate the fact that the romance isn't the main focus of these books. Both Gretchen and Emma may have found love (or be on the way to it) but these books are more about the magic and the mystery. This series is definitely darker than the Drake Chronicles but I don't mean that in a bad way and I'm always completely hooked from beginning to end. I do have to warn you that this book ends on a killer cliffhanger but although I'm disappointed I'll now have to wait a year for the final instalment I know it will jump straight to the top of my wish list when it is released.