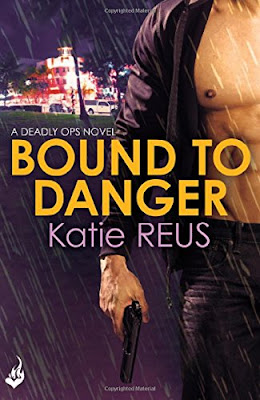 At a benefit dinner, community activist Maria Cervantes overhears two men plotting a terrorist attack that could rock Miami to its core. But before she can alert the authorities, she's almost killed in a massive explosion - and wakes up in hospital with no memory of what happened. She is now a person of interest to the NSA - and especially to Agent Cade O'Reilly.

Maria is the one woman Cade has never been able to forget. Years ago, he disappeared when she needed him most. Now he's sticking by her, whether she likes it or not, because the memories locked inside her mind could hold vital clues to the next attack . . . but also because he never wants to let her go again.

Review:
Maria is at a charity gala when she accidentally overhears two men plotting a terrorist attack, she manages to escape the building but before she can get completely free of the area she is injured in a massive explosion and loses her memory. She remembers enough to know that there are more attacks planned but the trauma has left the details fuzzy so she doesn't know enough to help police stop them. Cade is the NSA Agent who is assigned to protect Maria and help her get her memory back. He was friends with Maria's brother and had started developing feelings for her but he let Maria down once and is determined never to do it again. When the terrorists realise that Maria overheard important details about their plans it paints a target on her back but Cade will do whatever it takes to keep her safe. The real question is whether she'll get her memory back in time to help the NSA stop the terrorists before even more innocent lives are lost.

Bound to Danger is the second story in Katie Reus's Deadly Ops series and it's just as action packed as the first. Each book works well as a standalone as they all focus on a different couple but as with any book from this kind of series you get to see previous (and future) characters from the NSA team that Cade works for so I think it's nicer to read them in order.

Cade is everything you could want from a romantic suspense hero, he's an ex-Marine and now serves his country by working for the NSA so he's a well trained and very protective alpha male. He hates himself for walking away from Maria after her brother died but he didn't cope well with the loss of his best friend, he felt like he was to blame for everything that happened and thought that Maria would never be able to forgive him for it. Now he's older and wiser and he realises exactly what he let slip through his fingers so he's not going to let this chance pass him by without trying to win her back.

Maria is smart and caring, she comes from a wealthy family but wants to give something back to the community so she puts all her energy into helping run a local community centre where she also volunteers as a councilor for children in need. She is completely out of her depth in her current situation but she never lets her fear overtake her. Maria knows that if she can just find a way to unlock her memories then she can help protect innocent lives, something that is even more important to her after her own devastating loss the night of the gala. She's very wary of letting Cade get close to her again but he's everything she ever wanted in a man and her feelings haven't changed in the years since she saw him last which makes him very hard to resist.

Bound to Danger is full of action and intrigue alongside a wonderful romance between two great characters. This series is quickly turning into a favourite and I'm really looking forward to picking up the next story.