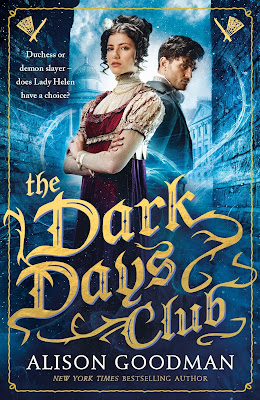 London, April 1812. Lady Helen Wrexhall is set to make her curtsy to Queen Charlotte and step into polite Regency Society and the marriage mart. Little does Helen know, that step will take her from the glittering ballroom of Almacks and the bright lights of Vauxhall Gardens into a shadowy world of demonic creatures, missing housemaids and deadly power.

Standing between those two worlds is Lord Carlston, a man of dubious reputation and infuriating manners. He believes Helen is destined to protect humanity from an unearthly truth, but all he can offer is danger, savagery and the possibility of madness. Not the kind of destiny suitable for a young lady in her first London Season.

Against a backdrop of whispered secrets in St. James’s Palace, soirees with Lord Byron and morning calls from Beau Brummell, The Dark Days Club is a delightfully dangerous adventure of self- discovery and the dark choices of new found adulthood.

Review:
Helen has been raised by her aunt and uncle to be a proper Regency Lady so she's expected to spend all her time getting excited about dresses, balls and her upcoming debut where she will be presented to the queen. However, when a maid goes missing and people start getting murdered Helen has other ideas and she decides to investigate, opening herself up to a whole dangerous new world and now her life will never be the same again.

I was lucky enough to hear Alison Goodman give a reading from this book at a blogger event and I knew immediately that this was a story I wanted to read. There is no doubt that they author has done meticulous research into the time period and she has infused that knowledge into the story so that you'll discover loads of fascinating little tidbits while you're reading. As much as that's a wonderful thing in many ways it was a bit of a double edged sword because as fascinating as I found those bits of information they definitely dragged the story down and made this a much slower read than it could have been. I think part of that is down to my expectations, I went into this expecting a fast paced story about a girl learning to hunt demons and what I actually got was a very slow build historical almost romance with a tiny bit of demon hunting on the side. One isn't necessarily better than the other but if you're looking for option 1 then option 2 isn't really a brilliant substitute.

It's really hard to write this review because there were a lot of things I loved about this story, I've already mentioned that I enjoyed the setting, I liked the balls and parties and debut to the queen, I also liked Lady Helen's character, she was very independent for the time period and she has a real sense of honor and duty. She never asked to have special demon hunting powers and in some ways it would be easier for her to pretend she doesn't and go back to a life of letting other people take care of her and leave the worrying to someone else but she knows that she has an important path ahead of her and she does what needs to be done.

It takes a long time before we get to the demon hunting part of the story but once we do the pace picked up nicely and I'm definitely interested to see where things go from here for Lady Helen. She is under a lot of pressure from her family to make a good match, get married and settle down but that isn't going to happen if she follows the path destiny has laid out in front of her. I will definitely read the sequel when it is released, I think the series has a huge amount of potential and I'm really hoping that new books will have a stronger focus on Lady Helen's destiny and the rest of the Dark Days Club. I'll be going in with different expectations too which will hopefully mean that I'm expecting a slower paced story and won't be disappointed by it.