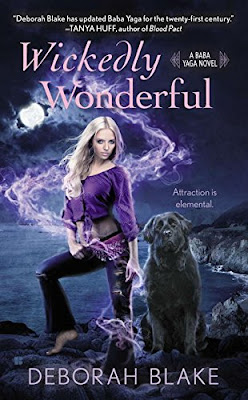 Known as the wicked witch of Russian fairy tales, Baba Yaga is not one woman, but rather a title carried by a chosen few. They keep the balance of nature and guard the borders of our world, but don’t make the mistake of crossing one of them . . .

Though she looks like a typical California surfer girl, Beka Yancy is in fact a powerful yet inexperienced witch who’s struggling with her duties as a Baba Yaga. Luckily she has her faithful dragon-turned-dog for moral support, especially when faced with her biggest job yet . . .

A mysterious toxin is driving the Selkie and Mer from their homes deep in the trenches of Monterey Bay. To investigate, Beka buys her way onto the boat of Marcus Dermott, a battle-scarred former U.S. Marine, and his ailing fisherman father.

While diving for clues, Beka drives Marcus crazy with her flaky New Age ideas and dazzling blue eyes. She thinks he’s rigid and cranky (and way too attractive). Meanwhile, a charming Selkie prince has plans that include Beka. Only by trusting her powers can Beka save the underwater races, pick the right man, and choose the path she’ll follow for the rest of her life . . .

Review:
Wickedly Wonderful is the story of Beka, the youngest of the three Baba Yaga witches currently residing in America. She has less experience than her fellow Babas and has much less confidence in her abilities thanks to the way she was treated by her predecessor but that doesn't stop her jumping in to help when the selkies and merpeople are forced to leave their homes due to a strange poison that is making them sick. The seafolk have been forced to leave everything behind in search of safe water and Beka is going to have her work cut out trying to figure out what is going on.

Marcus is an ex-Marine who has returned home and is helping his father run his fishing boat but the mysterious poison is affecting all sea life and all of the local fishermen are all struggling to make a living. Marcus is trying to convince his father to sell up so he can move away but the old man is stubborn and refuses to quit. Anyway, the last thing Marcus needs is a new age hippy like Beka hanging around but his father needs the money she is offering and agrees to take her out on the boat so she can carry out research.

In a lot of ways Beka and Marcus are complete opposites but they both have strong protective instincts and they're both prepared to do whatever it takes to protect the people they care about. Beka has to keep her true reason for being out on the boat a secret but it isn't long before Marcus gets suspicious and starts putting two and two together. Once he is onboard with the investigation things start to move a lot quicker but Beka has several people working against her trying to stop her getting to the bottom of things.

I had mixed feelings about the first book in this series, I love the way Deborah Blake has put her own spin on the Baba Yaga mythology and she's really brought the witches into the 21st century while still liking it through to the original stories but I felt a bit disappointed by the romance and think I'd have enjoyed the story more if there had been a bigger focus on the mystery. I'm happy to say I liked Wickedly Wonderful more, Beka was easier to relate to than her sister Barbara and I definitely felt more invested in the relationship between Beka and Marcus. They fit together really well and I liked how they started as enemies before becoming reluctant allies and eventually more. I also enjoyed the mystery side more in this book, it was a little too obvious who the bad guys were which is why this didn't quite hit 4 stars for me though. Either way this series is definitely improving and I'm looking forward to spending time with the third Baba, Bella, in the next book.