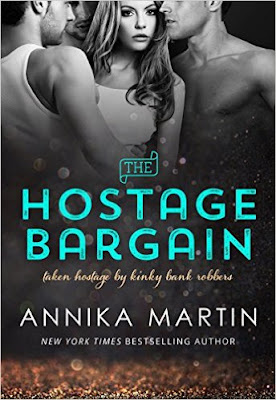 When small town girl Melinda Prescott is taken hostage by three hot bank robbers, she quickly discovers that a life of bank heists, luxury hotels, and kinky menages is way more exciting than working on the family farm. She should be scared of her dominating, fierce captors…but there’s something wicked inside her that’s craving to obey their every dark desire.

Melinda eagerly throws in with her three smoldering fugitives…and soon realizes that these are no ordinary bank robbers—and that bad guys aren’t always who they seem. But will her delicious captors overcome their own demons enough to let her in? And can these underdogs fight an evil conspiracy that’s larger than all of them?

Warning: This book contains a sexy bank-robbers-and-their-captive sandwich, light bondage, spanking, teasing hints of domination, and a little play-time in a hot tub. Oh, and some all-too-delicious alpha heroes who bend the heroine to their will.

Kinky Bank Robbers Series:
The Hostage Bargain
The Wrong Turn
The Deeper Game
The Most Wanted

Review:
Melinda is a cashier at her local bank, working for a boss she hates because she needs an income to look after her younger sisters. All she really wants is to escape and live her own life but her family is relying on her and she has too many obligations. She hates her life so much that when the bank is held up by three armed robbers she actually goes out of her way to make sure the guys find all the good stuff when they're raiding the safe. Then when she is taken hostage it looks like she might finally get the chance to have an adventure after all.

This is the kind of book that you need to throw away all sense of reality before you start reading, the situation that Melinda finds herself in is about as far from realistic as you can get in a contemporary setting but as long as you're prepared to just go with it you'll probably end up having fun. The story kicks off right in the action as the robbery is already underway and Melinda is immediately attracted to the gun wielding guys who are threatening her (I mean who wouldn't be turned on by a guy waving a gun at them? *insert sarcasm here*). She hates her job and her boss is an arse so she decides that helping the robbers get away with as much loot as possible is a suitable form of revenge. Later, when she's taken hostage, she actually ends up begging them to take her with them after they plan to release her, after all she's always wanted an adventure and what better way to have fun than with three sexy bank robbers who all seem to be more than a little interested in her body?

If you can ignore all that and just go with it then I'd say you should give this story a try, for an erotic read with a bit of added suspense it's actually quite fun and has a nice level of heat to it. I'd say the sex was tamer than I was expecting, there is some light bondage and a hint of domination but nothing particularly major, I'm thinking this might be built upon in later instalments though. There are some M/F/M scenes but I have to admit I was a bit disappointed that one of the guys didn't get involved at all, I mean what's the point of having three hot guys around if one is going to leave every time the good stuff starts? I think that's something that will also be addressed in later books though so I've not given up hope yet.

For an Amazon freebie this isn't a bad, there were some editing issues but nothing too major and I've seen far worse offerings. The writing is pretty decent and the story moves along at a pace that kept me reading just so I could find out what would happen next. I enjoyed this a lot while I was reading it but the trouble is that it's pretty forgettable once you put it down again, these characters didn't stick with me and I don't feel particularly invested in finding out what will happen to them. I might continue reading the series at some point but I don't feel any burning desire to buy the next book and dive into it immediately and I don't think it'll be too long before I forget I ever read this one.