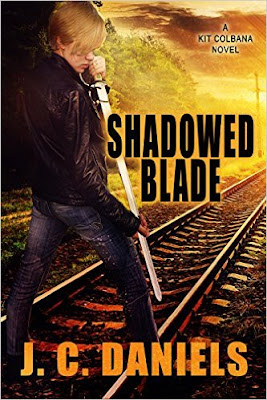 Something wicked this way comes . . .

The arrival of a very important person in her office seemed to be the start of a lot of problems for Kit Colbana, investigator extraordinaire. Claiming that he needed somebody with her special skillset, he sends her on a series of jobs that made little to no sense until one culminated with both her and her partner, Justin barely escaping with their lives.

Back in Orlando, they go their separate ways to recover, Justin heading to the house of a local witch, while Kit returns to the Lair, where she’s recently been living with her lover Damon, the Alpha of the Southern Cat Clans.

There’s barely a chance for to catch her breath before trouble of the highest order comes knocking on her door. This time, it’s the form of a psychic by the name of Nova. Nova has bad, bad news…Justin has gone missing and so has the witch who was going to put him up while he healed. Colleen, one of Kit’s closest, dearest friends.

With all sorts of non-humans disappearing, fury doesn’t even touch what Kit is feeling as she heads out to hunt down the people responsible.

But Kit isn’t the only one out on a hunt…somebody is hunting for her…somebody Kit would rather never, ever see again.

Review:
I've been a huge fan of this series since I read Blade Song nearly four years ago (where the hell does the time go?) so I'm always itching to get the next instalment and I couldn't wait to start reading Shadowed Blade. You definitely need to read these books in order to get the most out of them though so I'm going to assume that anyone reading this review has already read at least as far as Edged Blade. I'd also recommend reading the short story Misery's Way before starting this book, if you haven't already bought that story separately you're in luck because it's included at the end of this one (this is one of the very rare occasions when it's better to start at the end of the book LOL). This story jumps in as if you already know the new character introduced in that short so you could end up feeling a little lost if you haven't.

I have to say that the beginning of Shadowed Blade felt a little choppy anyway, it jumped around a bit and skips chunks of time so I was initially left wondering what was going on but once the story kicks off it was everything I'd hope for from this series. Kit and Justin are working together on a case but everywhere they go a crazy witch appears and tries to kill them. There's plenty of action as Kit and Justin try to figure out who is targeting them and it looks like they have a new and incredibly dangerous enemy to deal with. While this is going on we finally get the chance to find out whether Frankie's magic had any effect on Kit.

We also get to meet a few interesting people from Kit's past which I really enjoyed. Nova is a fab addition to the cast, he has some incredibly interesting abilities and he added a lot of humour but we also have an encounter with a member of Kit's family and let's just say things don't go as expected! I'm not going to say more than that so I don't spoil the surprise but I think we're going to see the series take a very interesting turn over the next few books. This series continues to be as much fun as always and I'm settling in and preparing myself for the long wait for the next book.