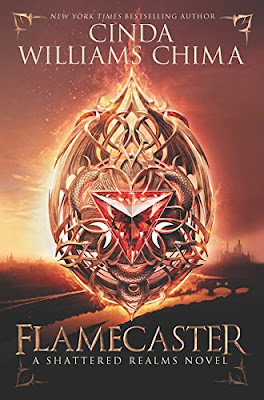 Set in the world of the New York Times bestselling Seven Realms series, a generation later, this is a breathtaking story of dark magic, chilling threats, and two unforgettable characters walking a knife-sharp line between life and death. This dazzling beginning to a new series is indispensable for fans of Cinda Williams Chima and a perfect starting point for readers who are new to her work.

Adrian sul’Han, known as Ash, is a trained healer with a powerful gift of magic—and a thirst for revenge. Ash is forced into hiding after a series of murders throws the queendom into chaos. Now he’s closer than ever to killing the man responsible, the cruel king of Arden. With time running out, Ash faces an excruciating choice: Can he use his powers not to save a life but to take it?

Abandoned at birth, Jenna Bandelow was told that the magemark on the back of her neck would make her a target. But when the King’s Guard launches a relentless search for a girl with a mark like hers, Jenna assumes that it has more to do with her role as a saboteur than any birth-based curse. Though Jenna doesn’t know why she’s being hunted, she knows that she can’t get caught.

Eventually, Ash’s and Jenna’s paths will collide in Arden. Thrown together by chance and joined by their hatred of the ruthless king, they will come to rescue each other in ways they cannot yet imagine.

Review:
*Please note that this review may contain spoilers for the Seven Realms series so if you're not up to date with those books look away now*

I absolutely love Cinda Williams Chima's Seven Realms series so when I found out she was returning to that world, albeit 20 years later, in the Shattered Realms books I couldn't wait to pick up Flamecaster. You know that well used phrase "be careful what you wish for" though? Well, Flamecaster is a perfect example of why you should take that advice to heart! This book may be set 20 years in the future and it may revolve around the next generation of characters, but that doesn't make it any less brutal and the first five chapters nearly killed me. I was utterly heartbroken and I came so close to putting this book down and pretending it didn't exist because the author doesn't shy away from tearing apart things that we thought were safe at the end of the previous series. I'm still praying that events at the beginning of this book weren't what they originally seemed and that we're going to be able to heave a huge sigh of relieve when we pick up the next book and find out what really happened. Please Cinda Williams Chima take pity on me, I beg you!

Anyway, if you can get past those first few chapters and kind of put aside your love for old characters long enough to give the new ones a chance I still think you're going to love this book so don't let my comments above put you off reading it. We are introduced to some absolutely brilliant characters here and I'm really excited to see what comes of them as the series continues. This book starts 20 years on from The Crimson Crown, Raisa has been a good queen to the Fells but they have been at war with the Arden ever since she publicly rejected the king's marriage proposal so long ago. The war has taken it's toll on the Fells and the surrounding realms but Arden is stronger than ever, especially since they have been capturing wizards and using magical collars to force them to do the king's bidding.

I was a little worried that the main characters were only about 13 when we first started reading but luckily after a bit of background we get to jump forward around 4 years which puts them at a similar age to Raisa at the start of the previous series. Ash is Raisa and Han's son and he's seen first hand what the King of Arden has cost his family and his people so he decides to set out on a mission to sneak into Arden and assassinate him. He has been trained as a healer but that just gives him an advantage as he knows which plants can kill, he just has to get close enough to the king to be able to use them. Ash has a lot of Han's street smarts and he's a really easy character to root for and like although I wasn't too happy about the way he left home so suddenly without letting Raisa know he was safe.

Jenna is a girl who comes from a poor town in Arden, she was forced to work in the mines from a very young age and when the king killed her two closest friends she joined the rebellion determined to end his reign of terror once and for all. There is a lot more to Jenna than first meets the eye and her family have been keeping secrets that even she doesn't know about so her storyline gets interesting really quickly when it becomes known that the king is searching for a girl with a certain birthmark. I'm not going to say much more than that - I think you should read the book to find out the details! - but I loved her character. She's incredibly brave and puts herself into some tough situations in her quest for revenge so I definitely want to see her succeed with her goals.

We have a couple of great side characters too in Lila and Destin. Lila is a warrior and at first glance she's quite mercenary and only seems to go where the money is but she has a good heart and is very protective of the people she cares about. Destin is more morally ambiguous, I'm hopeful that he's on the side of good but I do worry about some of the things he does. Is he just playing the king and his guards though? He's definitely keeping secrets and I'm not even sure if he knows what side he falls on yet so that's going to be interesting to watch play out in the future books. Flamecaster has everything I loved about the original series - the great characters, the interesting plot twists and the fabulous world building - but then Cinda Williams Chima had to one up herself and include dragons! I honestly don't think it could get much better and I'm going to be first in line for the sequel when it publishes next year.