Review: Begging for It - Lilah Pace 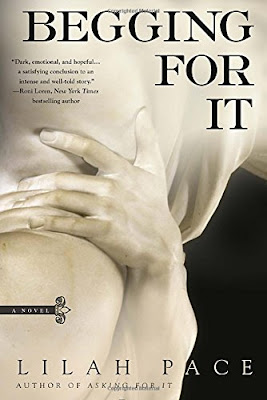 Some secrets should only be shared in the dark.

A stalker is terrorizing the city, and one of Jonah’s ex-lovers names him as a potential suspect to the police. Standing by a man under suspicion could cost Vivienne everything. But when Jonah’s stepfather takes advantage of the scandal to seize control of the Marks family fortune, Vivienne is drawn into her lover’s broken family and twisted past. Only then will she learn how dark the truth really is . . .

Review:
I loved Asking for It so I was really excited to read more of Vivienne and Jonah's story in Begging for It. I had such high hopes for them and I wanted to see them working through their issues both individually and as a couple. I wasn't expecting either of them to give up their kink, there's absolutely nothing wrong with two consenting adults enjoying whatever fantasy turns them on as long as nobody is getting hurt by it, but I did find it concerning that Vivienne couldn't enjoy sex in any other way. She has some deep rooted issues that she obviously needs to deal with for her own sake as well as for Jonah's.

I had such high hopes for this story that I can't help but come away feeling a little disappointed. Vivienne has no intention of changing, she doesn't want help and no matter how much she complains about hating herself for her desires she makes no effort to do anything about it. She's been in therapy for years and hasn't made even the tiniest bit of progress so either she's wasting her money on the world's most incompetent therapist or, much more likely in my opinion, she is pretending to pay attention and then blindly ignoring every piece of advice she's ever been given. It became so incredibly frustrating to see Jonah practically begging her to help him. He is desperate to change and working hard at dealing with his issues but whenever he asks her to bend even a little bit she gets resentful and starts acting like a child. She complains that Jonah won't give her what she needs but she never thinks about what Jonah needs. He doesn't want to give up their games altogether and he's not asking her to either but he doesn't want that to be all their relationship is about and she won't even try any other way.

Throw in the suspense of a serial rapist (and of course Jonah is the main suspect of the police investigation!) and the way Vivienne was acting made me dislike her even more. I didn't like her attitude and I found this book very frustrating to read. It felt like 90% of the story was Vivienne acting like a brat and then finally in the last 10% they had one couples session with the therapist and Vivienne was magically cured. The complete turn around she makes happens far too quickly to be believable and it all left me rolling my eyes. If I'm honest I can't for the life of me figure out why Jonah stuck it out for so long and I no longer care about them as a couple. This was such a disappointing sequel and it's made worse because I had such high expectations going in.