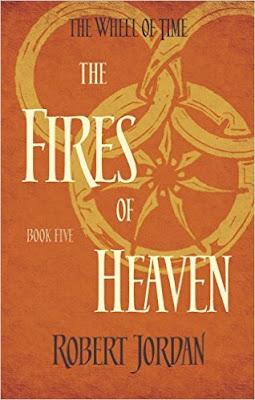 The bonds and wards that hold the Great Lord of the Dark are slowly failing, but still his fragile prison holds. The Forsaken, immortal servants of the shadow, weave their snares and tighten their grip upon the realms of men, sure in the knowledge that their master will soon break free . . .

Rand al'Thor, the Dragon Reborn, knows that he must strike at the Enemy, but his forces are divided by treachery and by ambition. Even the Aes Sedai, ancient guardians of the Light, are riven by civil war.

Betrayed by his allies, pursued by his enemies and beset by the madness that comes to the male wielders of the One Power, Rand rides out to meet the foe.

And the Fires of Heaven scour the world.

Review:
I've found it really difficult to write a review of The Fires of Heaven, mainly because as much as I'm loving the Wheel of Time series as a whole I was actually a little disappointed with this instalment. It was much slower than the last couple of books, particularly in the first half, and it took me much longer to read than it should have.

I thought it was very weird that Perrin, Loial and Faile were completely absent for the entire book. They played such huge parts in the last one that perhaps it was time to let some of the other characters shine but I would have liked just a glimpse at what is going on with them, especially considering the way things were left with them at the end of The Shadow Rising.

I was also incredibly irritated by nearly all of the women in this book. Nynaeve has been a favourite character of mine since the beginning but it's like she's had a personality transplant and she's acting like such a brainless idiot that I wanted to smack some sense into her. It really says something when you have Egwene call you out for your behaviour and it was shocking to find that Egwene was actually the most sensible of the two for this book - she's definitely learning something from the Wise Ones but I think Nynaeve must have had a brain injury! I honestly don't know how Elayne has coped with the pair of them though, I would have murdered them both if I was in her position. Although she doesn't have much of a leg to stand on considering the way she behaved around Thom for most of the book, it was actually embarrassing to watch.

Min and Siuan's story was probably the most interesting part of this book for me but even that went downhill once they met up with more of the Aes Sedai and were relegated to the side lines. I'm also kind of fed up with Elayne, Min and Aviendha mooning around over Rand (and his constant thoughts about the three of them!), I hate to say it but Robert Jordan isn't very good at creating believable relationships and I don't really feel much of a connection between any of them yet. Let's hope that improves as the series continues. Moiraine spends much of this book distancing herself from everyone else and being just as secretive as ever which is still irritating and I think the only woman who didn't get on my nerves for at least part of the story was Birgitte.

On the positive side it was great to see Rand step up and take action as the Dragon Reborn, he's finally accepted his destiny and started making plans for the future. I love spending time with the Aiel too, especially the Maidens of the Spear, and they get a big chunk of page time in this book. Mat has continued to improve as a character too so I'm looking forward to seeing what he decides to do next.

The Fires of Heaven wasn't a bad book but it just didn't live up to my high expectations for this series. I'm still hugely invested in the world and want to spend more time with the characters (even the ones who irritate me!) so of course I'll be diving into the next book very soon.