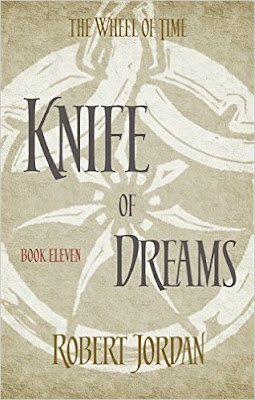 As the very fabric of reality wears thin, all portents indicate that Tarmon Gai'don, the Last Battle, is imminent - and Rand al'Thor must ready himself to confront the Dark One. But Rand must first negotiate a truce with the Seanchan armies, as their forces increasingly sap his strength.

All is in flux as established powers falter . . . In Caemlyn, Elayne fights to gain the Lion Throne while trying to avert civil war and Egwene finds that even the White Tower is no longer a place of safety.

The winds of time have whirled into a storm, and Rand and his companions ride in the vortex. This small company must prevail against the trials of fate and fortune - or the Dark One will triumph and the world will be lost.

Review:
Finally a book comes along that has restored my faith in the Wheel of Time series! The first four books were absolutely brilliant but I think anyone will agree that the series went a bit haywire after that, Robert Jordan kept introducing more and more points of view and random plot threads that just never seemed to go anywhere. The stories went from being 1000 pages of pretty much non stop awesomeness to being 600 pages of boring description with about 200 pages of actual plot development and I'd considered quitting the series many times. It's only the fact that I've been buddy reading the series that pulled me through, that and the fact that I've now read over 9000 pages in this world (which is a LOT of reading hours!) and I'm rather invested in the characters by this point!

Anyway, all is almost forgiven because Knife of Dreams reminded me how much I loved the earlier books (and it also proved that the most recent offerings just couldn't compete). I'm sad that this is the last book Robert Jordan was able to finish before he died and I'm a little nervous about Brandon Sanderson taking over the series for the remaining three books. I'm going to hope that he was able to create a fitting end to the series though and the fact that he had Robert Jordan's blessing and used his notes to help him makes me think we'll at least get to see the ending Robert Jordan was aiming for.

So what was so great about Knife of Dreams? Well we finally start to get some resolution to things that have been plodding along at a snail's pace for ages now. Perrin finally has a chance to rescue Faile, Rand takes on another of the forsaken, Mat and Tuon's courtship gets even more confusing for him, Nynaeve outwits Lan in a moment of utter brilliance, Egwene shows the world her backbone and totally earned my respect, we finally find out what Moiriane's letter to Thom was all about (and it's going to lead to something fantastic!) and Loial's family finally catch up with him.

I think the only chapters I didn't enjoy were the ones about Elayne, she's annoyed me for a long time now but I got so fed up of hearing about her pregnancy mood swings. I also hated the way she constantly puts herself into dangerous situations using Min's visions of the babies being born healthy as proof that nothing bad can possibly happen to her. I'd actually quite like to see her made to suffer for that but luckily for her Birgitte is always on hand to save the day. Aviendha has been stuck on the sidelines for several books now so I'm actually glad to see her being removed from Elayne for a bit and hope that means she'll be given a chance to shine again. I still think the weird love square would be much better off as two separate couples. Min and Rand fit together perfectly while Elayne and Aviendha are far more upset about leaving each other than they ever have been about parting from Rand.

Anyway, Knife of Dream left me excited about the Wheel of Time series for the first time in ages and I'm looking forward to seeing how Brandon Sanderson does at pulling all the different threads together ready for the big finale.