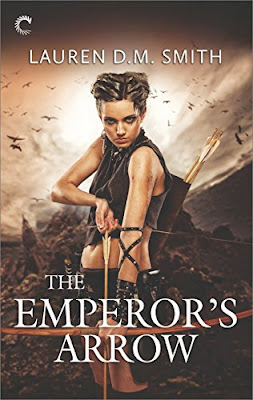 Debut author Lauren D.M. Smith delivers an epic fantasy romance in this soaring tale of a kickass warrior and the emperor she's honor-bound to defend

The bride candidates have been summoned. Their numbers are many, yet only one is an Amazzi warrior. Only one would give her life to protect him.

Evony of Aureline, warrior of her people, has no intention of becoming a hideous old man's bride. Though her people have sworn their loyalty to the legendary emperor Galen, Evony knows little of courts and intrigue. It's simply not her world.

Yet it's on the palace training grounds where Evony's archery skills gain her the respect of soldiers and legates alike. The emperor himself takes notice of the beautiful, ruthless warrior. In turn, the young, steely eyed Galen is nothing at all what Evony expected.

This man could very well conquer her heart. But does he feel the same?

As the rivalry among the remaining bride candidates intensifies and the plot for the throne unfolds, Evony must make a grave choice: fulfill her destiny and protect her people or follow her heart and pursue true love.

Either way, the honor of the Amazzi people and the future of the empire now rests with Evony of Aureline. For she is the Emperor's Arrow.

Review:
Evony is a warrior of the Amazzi, a matriarchal clan from a small island. She has never visited the mainland before but she has been chosen to represent her clan at a contest to decide the Emperor's new bride. Evony has no interest in becoming Empress but her clan has sworn fealty to the Emperor's family so she will do her duty and compete. She intends to use her time on the mainland to attempt to find a life mate, or at least someone with good genes to impregnate her, before she goes back to the island to do her duty to her clan.

The Emperor's Arrow is an impressive debut from Lauren D.M. Smith, it's a fantasy romance so expect a lot of focus on the relationship between Evony and Emporer Galen but the author has created a pretty interesting world too and I enjoyed what we've seen of it. I would have absolutely loved more background information though, I wanted to spend more time with Evony's clan and to learn more about the world in general and I think this could have been the start to a brilliant series. As I understand it it's a completely stand alone story which is a shame because there was so much more to explore.

Evony is a great character, she's a fierce warrior who has absolutely no interest in court etiquette or playing nice with the other women in the contest. She's there out of duty and not because she wants to become the Emperor's bride but it's her reluctance to win that makes her stand out from the others. Galen is intrigued by this strong woman who knows exactly what she wants and he enjoys spending time with someone with such a refreshing attitude. Evony has no need to suck up to Galen so she tells it like it is and she is happy to call him out when he's making unreasonable demands. The two actually fit really well together and I enjoyed the romance between them.

I'll definitely be watching out for more from this author, I believe her next book is another stand alone fantasy romance (Enveloping Shadows) but I'm hoping that she'll choose to revisit Evony and Galen, or at least their world but from another character's point of view, at some point in the future.