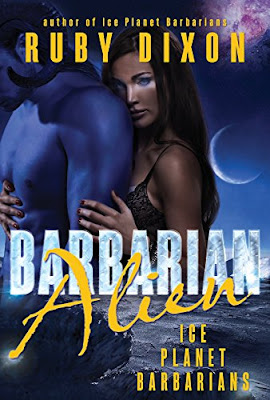 Twelve humans are left stranded on a wintry alien planet. I’m one of them. Yay, me.

In order to survive, we have to take on a symbiont that wants to rewire our bodies to live in this brutal place. I like to call it a cootie. And my cootie’s a jerk, because it also thinks I’m the mate to the biggest, surliest alien of the group.

BARBARIAN ALIEN is a sequel to ICE PLANET BARBARIANS. You do not have to read both in order to understand the plot, but the story will be richer if you do!

Review:
I'm pleasantly surprised by how much I have been enjoying this series, I picked it up just expecting some fairly straightforward alien smut but there is actually a pretty decent story and some great characters in there too. We saw Raahosh sneak away with Liz at the end of the previous book, his khui recognised Liz as his mate immediately and but he was worried someone else in his tribe would try to claim her so he stole her away to give her time to accept the bond between them.

I loved Liz but I can understand why she could rub some people up the wrong way, especially in the beginning thanks to her abrasive attitude. She's quite a brash character who knows what she wants and doesn't like being told what to do, she is skilled though and she's got the abilities she needs to survive without the help of her big blue alien kidnapper. She is not at all happy with the way Raahosh has treated her and she's even less happy that she had to accept a khui to survive on this new planet so she's not about to let her new "cootie" decide who she has to spend the rest of her life with. She is determined to resist Raahosh at any cost but her feelings towards him start to change when she spends more time getting to know him.

Raahosh is her opposite in a lot of ways, he's also a skilled warrior but he's been fairly isolated amongst his tribe and is a bit of a loner in a lot of ways. He is much more sensitive and thoughtful than it first appears and he's actually quite adorable when you get to know him. I really enjoyed seeing him try to win Liz around, it was amusing seeing how confused he was by the way Liz reacted to things he said and did. She wasn't at all the woman he expected her to be but I think he grew to respect her even more because of it.

The one thing that irritated me about this book was the way the rest of the tribe treated Raahosh and Liz. It's understandable that they had to have rules in place but I was annoyed that they wouldn't even let Liz have a say in certain things that would effect her entire future. I was even more annoyed by Liz's friends who should have stood up for her but basically let her get on with things with no support. Luckily that wasn't dragged out for too long and I was happy with the way things resolved so it didn't bother me too much. This series has been a lot of fun so far and I'm looking forward to continuing it.