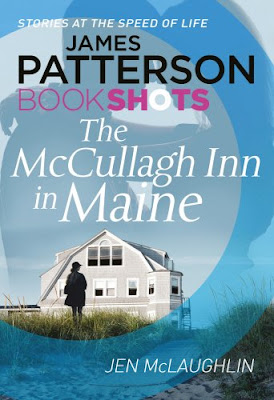 Her second chance at love...

Chelsea O'Kane escapes to Maine with fresh bruises. She's ready to begin anew – until she runs into her old flame, Jeremy Holland. As he helps fix up her inn, her heart heals and they rediscover what they once loved about each other. But as the two play house, it starts to seem too good to last...

Review:
Chelsea is on the run from her abusive ex, she left her entire life behind in Miami and has returned to her home town in Maine where she's hoping to get a new identity and start her life over again by taking over her aunt's old Inn. The last thing she's expecting is to bump into her childhood friend Jeremy, the first boy she ever loved and the first one who broke her heart. Jeremy seems pretty keen to pick things up where they left off but Chelsea has been burned by him before and she has enough troubles on her shoulders without risking her heart all over again.

The James Patterson BookShots series are books that are meant to be read in one sitting, they're fast paced reads that you can easily finish in an hour or so which is perfect when you don't have much time but still want to be able to read a complete story. I understand that relatively short books (this one is 137 pages) don't give the author as much time to fully develop the characters but that's not always an issue with second chance romances if they are able to build a sense of history between the couple. Unfortunately that didn't work quite so well as I'd hoped here because both Chelsea and Jeremy were keeping pretty major secrets.

I could understand why Chelsea didn't want to let Jeremy in because she didn't want to put him in danger and she was at least upfront enough with him to let him know that something terrible had happened in her life that she wasn't ready to talk about. I just think it would have worked better if readers had been let in on the secret sooner, we were kept in the dark alongside Jeremy and rather than adding to the suspense I found it was frustrating to not fully understand what she was running from. On the other hand Jeremy's secret actually made me angry, he had reasons to keep that secret in the beginning but once things reached a certain point I felt he should have been honest with her. Trying to pursue a relationship with her while hiding something so important was completely out of order and made me lose some of my respect for him. I found that Chelsea was a bit too quick to forgive him and that didn't help me believe their relationship would be a success.

I knew that this book was going to be a series but I'd just assumed that each book would focus on a different couple so finding out that Chelsea and Jeremy's story continues into the next book has made me think we might get to see the development that was missing a bit in this book. I'm interested to see how things go between them now that their secrets are out in the open and I think I'll end up enjoying the second book much more.