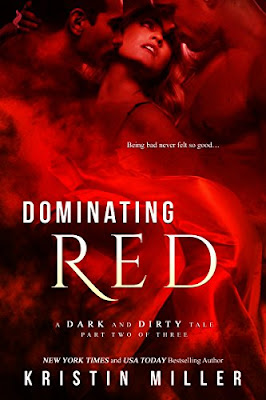 In part two of this Dark and Dirty Tale serial from New York Times and USA best-selling author Kristin Miller, Red has two hot alphas in pursuit. But which one should she choose?

Lukas, the Alpha of the Arcana wolf pack, has chosen to seduce me in his private chamber before I join his pack and declare a mate. But Lukas doesn’t intend to rush things. A tantalizing game of cat and mouse uncovers my dark desires, and no matter how I try to resist, I’m lost in him.

Although the sex is so good I forget my own name, I can’t deny there’s still something missing…Reaper, the Omega’s eldest grandson.

He swept me off my feet before meeting Lukas, and I can’t get him out of my mind. And now that Lukas has taken me, Reaper is more protective than ever. I'm torn, but I have to choose—the one who has captured my heart or the one who possesses my body. And there is more than passion at stake—lives hang in the balance.

Get ready for scorching hot Alphas, a spitfire heroine, and a breathless cliffhanger ending.

Review:
So this second instalment of the Dark and Dirty series focuses on Ivy and the pack alpha Lukas. He has chosen her out of all the new initiates and as much as she has started to develop feelings for Reaper she's also very attracted to Lukas. Lukas is very dominating and he knows exactly what he wants from Ivy, he plays her body like a master but no matter how hot the sex is she still finds herself thinking of Reaper. As the mating ceremony draws ever closer Ivy knows she must make a decision but will she go with her head or her heart.

I hate to say it but this is where the series started going downhill for me. I still don't think the world makes sense, it seems totally stupid that the new initiates to the pack have to choose their life mate on at their very first ceremony, even in Ivy's case where she has only met two of the men in the pack. How is she supposed to decide something so important when she doesn't know what all her options are? Why is it only the women who get to choose their mate? Why don't the men (apart from Lukas) get a say in the matter? For that matter why does Lukas get to pick any woman he wants? I know he's the alpha but they keep saying that the omega is actually the one who is in charge so why would she let him treat pack women like that? I'm probably overthinking things considering this series is only around 150 pages in total (so it's pretty much a novella split into three parts!) but it bugs me when things don't make sense!

I didn't like Lukas from the beginning, he comes across as selfish and entitled, he doesn't really care what is best for Ivy only about what he wants and he pretty much warns her that selecting anyone else as a mate is out of the question because it would supposedly make him look bad. Even that doesn't make sense since he has his pick of women every year and since he's not mated already they were all obviously allowed to choose a different partner at their ceremonies! The sex scenes between Lukas and Ivy just didn't do it for me, she was willing enough once they got started but I kept thinking about the fact that she wasn't allowed to say no to him even if she wanted to and I thought there was a far better connection between her and Reaper in part one.

There is a bit of a plot running through the background regarding stolen pack money and someone trying to undermine the omega but it was so obvious who was behind it that it didn't even feel like a mystery. I did go on to read part three purely because I wanted to see who Ivy ended up with but it didn't really get any better and I can't say that I'd particularly recommend the series unfortunately, especially when you consider how expensive it is thanks to the serialised format!