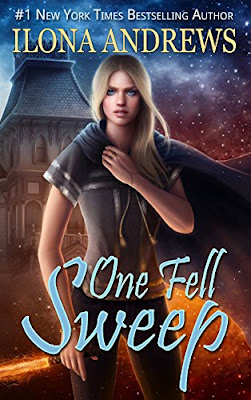 Dina DeMille may run the nicest Bed and Breakfast in Red Deer, Texas, but she caters to a very particular kind of guest… the kind that no one on Earth is supposed to know about. Guests like a former intergalactic tyrant with an impressive bounty on her head, the Lord Marshal of a powerful vampire clan, and a displaced-and-superhot werewolf; so don’t stand too close, or you may be collateral damage.

But what passes for Dina’s normal life is about to be thrown into chaos. First, she must rescue her long-distant older sister, Maud, who’s been exiled with her family to a planet that functions as the most lawless penal colony since Botany Bay. Then she agrees to help a guest whose last chance at saving his civilization could bring death and disaster to all Dina holds dear. Now Gertrude Hunt is under siege by a clan of assassins. To keep her guests safe and to find her missing parents, Dina will risk everything, even if she has to pay the ultimate price. Though Sean may have something to say about that!

Review:
This series just gets better and better, I love reading along with the weekly instalments as they're published on Ilona Andrews' website but what I love even more is getting my hands on the final version and seeing how much extra depth has been added to the story and the relationships between the characters.

Dina and Gertrude Hunt are building a reputation of being able to deal with difficult guests and, thanks to the meddling of a certain Arbitrator, they are now facing their most impossible challenge yet. The future of an entire race rest on Dina's shoulders as the Hiru come to her with a very important request and when she finds out how they have been persecuted she has to help them. It puts the inn at risk of exposure though because the Hiru's enemies will do anything to destroy them. I love that Dina is always willing to fight for the underdog and I'm really enjoying learning more about the Innkeeper's abilities. Just when you think you know everything she can do Ilona and Gordon throw in new twists to keep you on your toes. They really are the most creative authors out there!

While we're on the subject of Dina I want to talk about how much I love the relationship between her and Sean. It's been a lovely slow build relationship and I missed him a lot in the last book but they make real progress in One Fell Sweep. There are some important heart-to-heart discussions that melted my heart a bit and for anyone who was a little disappointed with the fade-to-black sex scene in the online version you'll be glad to know that it was much more in depth in the final published version now that no young eyes can stumble across it on their webpage.

I have always been team Sean when it comes to Dina but I also love Arland so I was very happy that he has a pretty large role in this book too. We finally get to meet some of Dina's family when they travel to a vampire planet to rescue Maud and her young daughter Helen and it looks like Arland has a new sister to crush on. Maud is an excellent character, she's very vampire in her thinking and her fighting skills have Arland completely enthralled. It was Helen that stole the show though, she is utterly adorable in a rather bloodthirsty way but what else would you expect from a half-vampire who was raised by two warrior parents?

Of course we still have all the much loved core cast of the series, Caldenia never fails to make me laugh with her acerbic comments, Orro makes me constantly hungry by talking about his delicious creations, Beast is just a little bundle of cuteness when she's not getting ready to eat Dina's enemies and Gertrude Hunt is definitely a character in it's own right even though it isn't able to communicate with anyone apart from Dina. We get a few hints about Dina and Maud's brother Klaus has been up to and a very big clue about where they can find more information about their parents too so I'm eagerly waiting for the Andrews to start on the next instalment.

Reading the weekly online version is a unique kind of torture as you have to impatiently wait for each new chapter but the interaction between fans and with the authors make it such a fun experience. Even if you read it online I would still highly recommend buying the finished version too, there are so many little extra details added and they really turn the story from amazing into phenomenal. I'm looking forward to many more adventures with Dina and her friends.

Source: Received from the author in exchange for an honest review but I've also purchased my own finished copy because I love it so much I need it on my shelves!