Review: The Eye of the World - Robert Jordan 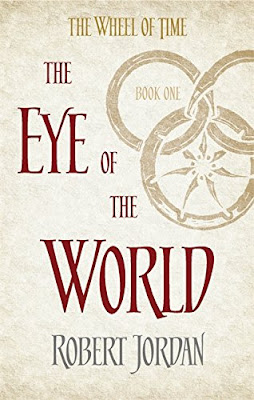 The Wheel of Time turns and Ages come and pass, leaving memories that become legend. Legend fades to myth and even myth is long forgotten when the Age that gave it birth returns again.

But one truth remains, and what mortal men forget, the Aes Sedai do not . . .

What was, what will be, and what is, may yet fall under the shadow.

Review:
I've been hearing amazing things about the World of Time series for years now but even though I've been a high fantasy fan since my teens I'd never quite been brave enough to tackle these books. 14 books, all coming in at well over 600 pages, was just too intimidating to start on my own and I kept putting it off. Then a bunch of awesome friends on Goodreads started talking about doing a mass group read and I just couldn't say no. So 2016 (and into the early part of 2017) has now officially turned into the World of Time Year. We're reading one book a month starting with The Eye of the World in January (and yes I do realise I've wasted half of February by taking so long to write this review so I'm now going to be in scramble mode to finish The Great Hunt by the end of the month!) and anyone who wants to join us is more than welcome to hop in at any point.

Anyway, it's probably time for me to stop rambling and start talking about the actual book! I had incredibly high expectations for The Eye of the World, and I have to say I was impressed. To start with the slightly negative I did feel there were a lot of similarities between this and the Lord of the Rings series. I could point out a million events or characters that reminded me of LoTR but at the same time I do think a lot of high fantasy series have the same basic premise, often starting with naive boys from a tiny village who end up on an epic quest to save the world from an evil enemy, so I don't think that's necessarily a bad thing. The fact is that even though I was noticing these similarities I was still completely hooked on Robert Jordan's tale. I wanted to follow Rand, Mat and Perrin's journey and I loved the incredibly detailed world that he has created. There is so much depth and history to it, we learn about all kinds of people and there are so many interesting back stories within these pages that I was never bored for a minute.

Robert Jordan also excels at character building Rand, Mat and Perrin are all from a tiny village in the middle of nowhere, they've never travelled further than the next village over and they know very little about the world at large. They're so isolated that a single visitor is a reason for the whole village to throw a party so when three strangers arrive at the same time you can imagine the kind of excitement that brings. Unfortunately humans aren't the only strangers in the area and when they are invaded by trollocs the boys find themselves pulled into something so much larger. They're forced to leave their homes to protect the people they care about but setting out on an adventure is much more intimidating than they expected and they're really thrown in at the deep end. These boys are very innocent and at the beginning they're not exactly the sharpest tools in the box, Mat in particular has some very stupid ideas and manages to pull them into all kinds of trouble. Luckily they have a few kick arse girls (& Lan) on hand to get them out of it!

That is definitely something to love about this series - the fantastic female characters. I absolutely love Nynaeve, Moiraine and Egwene. They're all incredibly smart, powerful women who know exactly what needs to be done and just get on with it. They'll sort the boys out in no time and we do see a huge amount of growth in just the first book so I have very high hopes for them (even Mat!) as the series continues. I could happily go on to rave about all of the side characters but I don't want to make this review even longer so I'll just mention a few favourites. Of course Lan comes in near the top of the list but I loved Elyas, Loial and Thom too and I feel invested in so many of these characters already. Perrin has had one of the most interesting journeys so far but I'm also very curious to see what happens with Nynaeve and Egwene in the next book. They have been given the chance to become so much more than they already are and it'll be interesting to see how hard they grab that opportunity.

I want to thank my buddy readers for encouraging me to finally start this series, I'm already loving every minute of it and I have a feeling it's going to be a firm favourite by the time I reach the end.