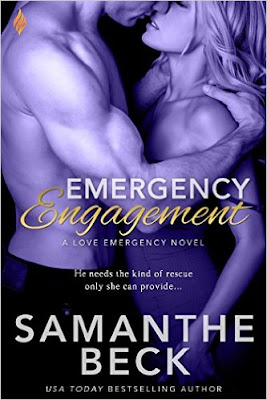 He needs the kind of rescue only she can provide . . .

Glass artist Savannah Smith expected a marriage proposal for Thanksgiving—just not from her strong, silent, super-hot neighbor. But when misplaced mail and a wayward can of paint lands them in a compromising position right as her family arrives for dinner, they assume he’s “The One” she’s been talking about.

Then his family shows up.

Fate dealt a crippling blow to paramedic Beau Montgomery’s heart, and he isn’t about to put it at risk again. Except, with his mother crying tears of joy over his surprise engagement to the sexy little blonde next door, he can’t bring himself to ruin her “Christmas miracle.”

Somewhere between the paint can to the head and the chaotic family trip to the ER, Beau manages to talk Savannah into being his fake fiancée long enough to survive the holidays.

Review:
I really love Samanthe Beck's stories, she always creates sweet and sexy romances with great characters and lots of humour and that's exactly what I was expecting from Emergency Engagement. In a lot of ways that's exactly what you get too, it starts off really well and the circumstances that lead to Savannah and Beau's families finding them in a compromising position were hilarious. I did find it a little hard to believe that the pair would be so quick to go along with a fake engagement considering they'd never even had a proper conversation before but it was fairly easy to ignore that considering how much chemistry they had and how well they got on.

Savannah is a free spirited artist, she's bright, colourful and lives life to the fullest. She's nobody's doormat so when her (ex)boyfriend treats her badly she has no problem walking away knowing that she deserves better. She immediately gained my respect for that and she was definitely the kind of girl you'd want be friends with. I loved the little hints we got to see about her work as a glass artist and really wanted to see more of that side of her life. Beau is brilliant, he's smart, funny and caring but he's not controlling and he is nothing like some of the alpha arseholes we've been seeing so much of lately. He has a really sad backstory that was pretty heartbreaking and I thought his reactions to things (until right at the very end of the book) were very realistic considering everything he'd been through. After suffering the worst kind of heartbreak he has closed himself off to the idea of a relationship, he's scared of getting hurt again and keeps everyone at a distance. He's definitely a protector though, you can see it every day in the way he deals with patients as a paramedic but also in the way he looks out for his parents and also Savannah. Savannah doesn't need someone to rescue her though and it was nice to see someone turn the tables on Beau and be the one looking after him for a change.

I actually loved these two as a couple, they fit together really well and I enjoyed the connection between them both in and out of the bedroom (although I'll admit I was expecting a little more spice considering this is a Brazen book!). What let down the story for me was the "twist" at the end, it was something I saw coming from a million miles away and I'd spent a lot of the book praying it wouldn't happen so I was incredibly disappointed when the story was so predictable. I guess I'm just sick of that particular plot device so perhaps it won't bother other people as much as it bothered me but it definitely knocked a star off my rating. I still love Samanthe Beck's writing though and I'm looking forward to reading more in this series. I'm hoping we'll get a book about Beau's paramedic partner Hunter and I'd also like to see more of Savannah's sister Sinclair.