I absolutely LOVE Maria V. Snyder's Chronicles of Ixia series so it shouldn't be any surprise that I was incredibly excited to get my hands on an early copy of the latest instalment Night Study. I'll be posting my full review later today but trust me, if you're a fan of this series you NEED this book! I think it might be my favourite book yet and that's really saying something! Anyway, to celebrate the release of Night Study I have a fab guest post from Maria for you including a special visit from one of my favourite characters but before we get to that let me give you a bit more information about the book. 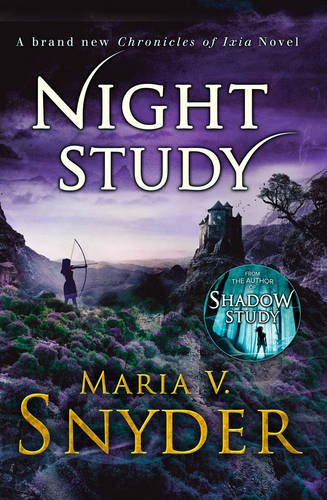 A new darkness is rising for Yelena Zaltana

Ever since being kidnapped from the Illiais jungle as a child, Yelena Zaltana's life has been in peril. But the recent loss of her Soulfinding abilities - the powerful magic that has protected her before - has made her more vulnerable to her enemies.

As she searches for a way to reclaim her abilities neither Ixia nor Sitia are safe for her. Especially since the growing discord between the two countries and the possibility of a way threatens everything Yelena holds dear.

Now with the most sinister threat she has ever faced approaching, Yelena will have to find a new way to fight the dark.

Now I'm really thrilled to hand the reigns over to both Maria and Valek who have very kindly agreed to drop by today and introduce themselves!

Maria: (Instead of me telling you about Valek, I asked him to tell you about himself.)

Valek: Maria said you’ve been asking about me. I’d like to know why. If you think you can bypass my security measures to reach the Commander, you are sadly mistaken. As the Commander’s chief of security, I’m responsible for his safety. I’ve been at this job for twenty-four years and know all the tricks. Before that, I trained as an assassin for two years at the School of Night and Shadows, and practiced my craft for two more years until I assassinated the King of Ixia when I was seventeen. This allowed the Commander to take over command of Ixia. If you insist on knowing my age you can do the math.

Most people are terrified when they see me. Although at six feet tall with black hair and blue eyes, I don’t look as threatening as my friend Ari. While he has the broad shoulders and the biceps to knock over an ox, I’m more lean, which helps when I’m climbing walls and escaping prisons. It’s when I’m in disguise that you really have to worry as I’m quite capable of changing my appearance and have even gone undercover as a woman for a season as Queen Jewel’s hairdresser. The Queen died without a clue. The King, however, being a magician—albeit corrupt and evil—put up quite the fight. Good thing I’m immune to magic.

I’ve a heart mate named Yelena and we’ve been together for eight years. Don’t even consider harming her or you will be hunted and killed by yours truly. I am also in charge of a vast network of spies. Members of my corps are in every city in Ixia and Sitia, so you can run, but you can’t hide.
Now you know all about me. And now that I’ve distracted you…turn around

Thank you so much for a wonderful guest post Maria, Valek stole my heart when I read Poison Study and he remains one of my all time favourite book boyfriends so it's always great to hear from him!

Don't forget to check back later today to read my full review of Night Study and make sure you check out the rest of the stops on the blog tour for lots of exciting posts and reviews!