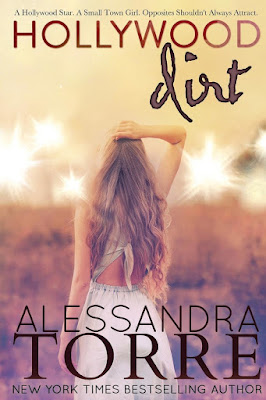 Summer Jenkins. That's me, a small town girl stuck in Quincy, Georgia. I cook some mean chicken and dumplins, can bluff a grown man out of his savings in poker, and was voted Most Friendly my senior year.

We were from different worlds. Our lives shouldn't have collided. But then Cole Masten read a book about my small town. And six months later, his jet landed on our dusty airstrip, and he brought Hollywood with him.

From the start, I knew he was trouble.
For our town. And for me.
Sometimes, opposites just aren't meant to attract.

Review:
Cole was one half of Hollywood's biggest IT couple but that was before he caught his wife cheating on him and his marriage imploded in a very public manner. Since then he's been completely off the rails partying hard and getting in all kinds of trouble. If he wants to have any chance at making his new movie venture a success then he's got to tone it down though, he needs to stop partying, stop drinking and stop sleeping around. It's time to knuckle down and get to work, even if that means moving to Quincy, the small town in the middle of nowhere where the movie is being filmed, weeks early and keeping his head down.

It's been a long time since Summer enjoyed living in Quincy, she's been a pariah ever since an unfortunate incident involving her cheating ex and what she wants more than anything is to save up enough money to be able to leave for good. The last thing she needs is the world's hottest leading man arriving on her doorstep but the money she can make helping his assistant scout for filming locations is worth putting up with a lot of stress and it doesn't hurt to enjoy the view when she's working.

Cole and Summer are like oil and water, just mix them up, light a match and watch them explode! In the beginning they can't agree on anything, I actually think one of them would swear the sky was green and the grass was blue just to avoid a reaching a consensus with the other. But you just know when the arguing is that heated there is some MAJOR sexual tension going on underneath it and when they finally give in to that attraction both of their lives will be changed forever.

I'll just come right out and say it - I LOVED this book! It's not often I rate a contemporary romance 5 stars, let's face it, as much as I enjoy a good romance they're pretty predictable and although they can't be beaten when you want something with a feel good factor it takes something extra special to deserve that full score.Well Alessandra Torre has done it with Hollywood Dirt, she's hit that rare and wonderful combination where everything just comes together so perfectly that you can't rate it anything less.

Everything about this book is special, the main couple, the tension, the chemistry, the supporting cast, the humour, the romance, the chicken sidekick (nope I'm not joking!), the heat and yes of course the hot sex. It all blends together into a story that will have you laughing or swooning the whole way through and leave you with the biggest grin on your face. I've heard a lot of good things about Alessandra Torre's writing but this is the first time I've picked up one of her books, I can guarantee that it won't be the last though and I'm incredibly excited to start working my way through her backlist. 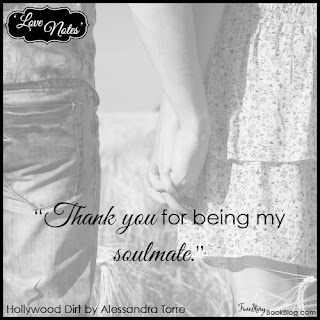