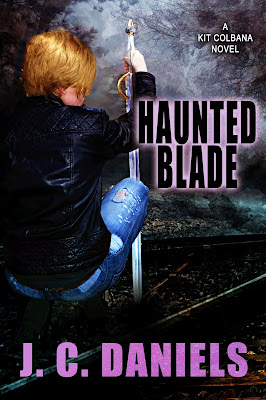 Never let it be said that Kit Colbana had ever been given the easy road. Or even the semi-paved road. Only weeks after dealing with the mysterious—and murderous—being called Puck, she’s got another killer on her hands. Perhaps even two.

Some of the bodies turning up bring up haunting memories of a past she longs to forget, but as always, that past is chasing her at her heels, like a hated shadow.

As the body count racks up, there’s an imbalance of power, particularly among the vampire population, and Kit must yet again deal with ugly memories as one of the monsters who tried to break her is set free to deal with the imbalance of power. Yet while a power struggle rages in East Orlando, there’s another, more subtle battle taking place and Kit feels like the center of it all.

Arrogant? Maybe. But the dead bodies don’t bear the mark of her grandmother’s pet killer by sheer coincidence…and she doubts her nemesis being released is either.

Review:
I'm a huge fan of this series so I loved the chance to dive back into Kit's world and see what's going on with her now. Her relationship with Damon is stronger than ever so she's in a pretty good place personally but things in Orlando aren't running quite as smoothly. It starts with the murders of powerful vampires from several of the largest houses and the power vacuum causes a lot of the younger vampires to lose control resulting in a number of killing sprees. As the bloodlust spreads more vampires are drawn to the area and it's not long before the situation is dire.

This instalment gives us a chance to learn more about Kit's background as a face from her past puts in an appearance and it looks like her grandmother has finally decided that it's time to come after her because there are a few too many things coming at her for it all to be a coincidence. I have a feeling this is just the beginning though and we're obviously building up for a huge showdown in the next couple of books.

It's no secret that I love these books so it pains me to say this but I didn't enjoy this book quite as much as I hoped to. I really struggled in the beginning because the story didn't seem to flow very well and that made it very hard to get into. Some scenes seemed to just end halfway through and then you'd be dropped into the middle of another scene and there were several times when I found myself backtracking trying to figure out what I'd missed. That was something completely unexpected from this author because I've never had that problem with any of the previous books. It did improve a lot in the second half though and at that point the pace picked up a lot and I found myself swept away in the story. This may not be the strongest instalment but it was still an enjoyable read and there were a lot of interesting revelations that have set things up nicely for the series going forward.

I'm definitely looking forward to the next book and I'm hoping we're going to start to discover even more about Kit's family as we go on.