Anyone who follows this blog will know I'm a HUGE fantasy fan so I wanted to spotlight some of the books that I'm really excited about reading but just haven't had time to get to yet. The Library of Fates by Aditi Khorana is one of them and it sounds fabulous so I really must get to it soon! 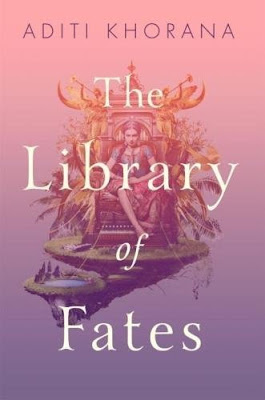 No one is entirely certain what brings the Emperor Sikander to Shalingar. Until now, the idyllic kingdom has been immune to his many violent conquests. To keep the visit friendly, Princess Amrita has offered herself as his bride, sacrificing everything—family, her childhood love, and her freedom—to save her people. But her offer isn't enough.

The palace is soon under siege, and Amrita finds herself a fugitive, utterly alone but for an oracle named Thala, who was kept by Sikander as a slave and managed to escape amid the chaos. With nothing and no one else to turn to, Amrita and Thala are forced to rely on one another. But while Amrita feels responsible for her kingdom and sets out to warn her people, the newly free Thala has no such ties. She encourages Amrita to go on a quest to find the fabled Library of All Things, where it is possible for each of them to reverse their fates. To go back to before Sikander took everything from them.

Stripped of all that she loves, caught between her rosy past and an unknown future, will Amrita be able to restore what was lost, or does another life—and another love—await?

Doesn't it sound great? Is it on your wish list too, or perhaps you've already read it? If you have any fantasy recommendations for me leave them in the comments, I can never have too many books on my to read mountain LOL
at 12:00