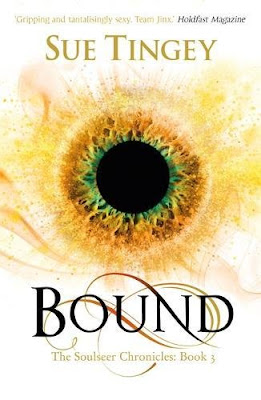 Lucky de Salle was dragged into the Underlands against her will, but there she discovered a whole new world - and a whole new life. She always knew she was psychic, but discovering her ghostly best friend was in fact her daemon half-sister - and she herself is half-daemon - came as a shock. Falling in love with two men wasn't in her plan either, but that's working out brilliantly.

Or it was . . . until Jamie tries to use his powers to control her, and Lucky loses all trust in him. Then when Lucky's enemies kidnap Jinx, intending to use his powers to destroy both human and daemon worlds, Jamie and his fellow Guardians are ordered to bring Jinx back - dead or alive.

If Lucky is to save him, and forgive Jamie, she must learn to use her own burgeoning powers - and fast!

Review:
Bound picks up the story a few weeks from where Cursed left off, Lucky, Jamie and Jinx are in a great place relationship wise but it all goes horribly wrong when Jinx gets kidnapped by their enemies. Thanks to their bond Lucky feels his pain as he is tortured and she's desperate to rescue him as quickly as possible. Jamie also wants to rescue him but as a Guardian he has an important role to play in protecting humanity and when Jinx is taken to the human realm the Guardians are ordered to stop whatever plan his kidnappers are working towards - even if the only way to do that is to kill Jinx. Even though Jamie promises her he'd never hurt Jinx Lucky finds herself struggling to trust him so she decides to work alone to bring Jinx safely home.

One of the things I've loved most about this series is that the author completely avoided the dreaded love triangle by making it clear from very early on that the two demon love interests were more than happy to share. I think this is the first time I've come across a triad relationship in urban fantasy but hopefully it won't be the last because that's definitely a solution I can get behind - I'd just like one that doesn't fade to black for the good bits please! I love how different the two guys are Jinx is the more playful teasing member of the group while Jamie is more sensitive and very caring but they're equally devoted to Lucky.

For her part Lucky has always seemed to care for both guys equally but that seemed to go a bit out of the window here and I ended up getting really annoyed with her for not trusting Jamie more. I get that she was desperate to rescue Jinx but Jamie would never do anything to hurt her and that includes letting the Guardians kill Jinx. It felt a bit manufactured to cause drama and because she refused to work with Jamie Lucky ended up making a lot of stupid decisions and getting herself into trouble because she'd go charging into situations with no back up. It made the story interesting for sure but I did want to shake some sense into her and I felt quite sorry for Jamie because it made him seem like the outsider in the relationship.

Overall I've really enjoyed this trilogy though, there's been lots of action and Lucky's guards have all been such brilliant characters. I'm going to miss all of them, even Mr Shenanigans and Mr Kerfuffle but especially Pyrites. I'm sad we're not going to get more stories about this group but I'll definitely be watching out for whatever Sue Tingey publishes next.