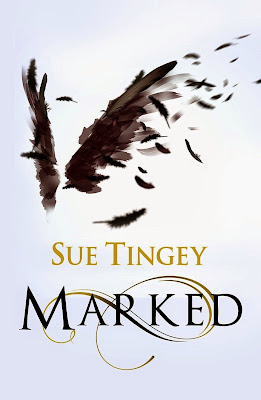 With no family and very few friends, Lucky’s psychic ability has always made her an outcast. The only person she can rely on is Kayla, the ghost girl who has been with her since she was born.

But Kayla is not all that she appears.

And when Lucky is visited by a demonic assassin with a message for her friend, she finds herself dragged into the Underlands – and the political fight for the daemon king’s throne.

Lucky, trapped in the daemon world, is determined to find her way home… until she finds herself caught between the charms of the Guardian Jamie, the charismatic Daemon of Death Jinx – and the lure of finding out who she really is.

Review:
Lucky is a psychic with the ability to see ghosts, something that has always made people look at her a little strangely and made her a bit of an outcast. In fact, her best (and only) friend is a ghost called Kayla who has been by her side for as long as she can remember. Lucky generally tries to keep herself to herself but when she receives a call from her old school about a ghost problem they're having she agrees to help by performing an exorcism. It's only when she gets there and discovers that the problem is actually demon related that Lucky realises she's in over her head and her world is turned upside down when she makes a startling discovery about her best friend. Not only is Lucky now being hunted by a demonic assassin but she finds herself in the middle of a political battle over who gets to rule the Underlands.

Marked is Sue Tingey's debut novel and she really starts her Soulseer Chronicles with a bang, I love discovering new authors and my only disappointment here is that I'm now going to have to wait a year for the next instalment. This is the kind of story that sucks readers in very quickly and you end up completely losing track of time while you're reading. The world building was clever, I enjoyed the contemporary British setting and feel to the beginning of the story but I also loved getting to visit the parallel world of the Underlands. Imagine heaven and hell aren't two places but instead one place combined, a place where demons of all manner roam alongside guardian angels. Not all demons are evil and not all of the angelic creatures are good so it's not always easy to spot friend from foe. This is the world that Lucky finds herself drawn into thanks to her relationship with Kayla. Lucky is completely thrown by everything she discovers, she is confused, shocked and scared but at the same time it is exhilarating getting to explore a new world and she soon realises that she could have a very different life in the Underlands to the lonely existence she had at home. She just has to decide what kind of future she wants.

I really enjoyed the relationship between Lucky and Kayla, they have been friend's for Lucky's entire life but Kayla has been keeping some huge secrets and that really effects the way Lucky sees her. Lucky is initially heartbroken by the way she feels that Kayla has betrayed her and it's not going to be easy for her to get past the lies and untruths she has been told. Their relationship is complicated but there is a strong bond between them and it's obvious that Kayla has Lucky's best interests at heart. There are some other really fantastic side characters in the book too, a particular favourite has to be the dragon Pyrites who was absolutely adorable but I also found myself incredibly amused by Lucky's bodyguards Mr Kerfuffle and Mr Shenanigans.

If you had told me about a potential love triangle before I picked up this book I probably would have been hesitant to read it, I'm so sick to death of that trope that it's starting to spoil books for me, but I have to admit that it is done really well here. Lucky has caught the attention of Guardian Angel Jamie as well as Jinx, the Daemon of Death, and it's very easy to see why they both hold such appeal to her. Jamie and Jinx are almost complete opposites and it's impossible to decide if I prefer the dark and brooding bad boy or the enigmatic angel. In fact I'm really, really, REALLY hoping that she's going to keep them both, there were a few hints that they'd be open to sharing and that's definitely the outcome I'm rooting for!!

Marked is a fantastic start to this new series, it has plenty of action, some great twists, brilliant characters, realistic world building and just a hint of romance. The story is a great mix between urban fantasy and straight up fantasy and I'm looking forward to more of that as the series continues. It's definitely a book I'll be reading again and I'll be eagerly waiting for the next book when it releases next spring.