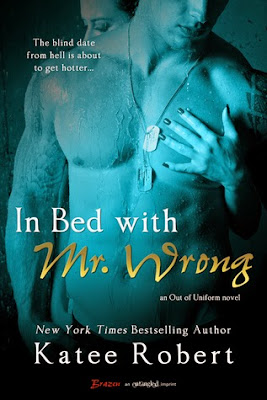 The blind date from hell is about to get hotter . . .

Brianne Nave is never doing her friends a favor again. When they begged her to go on a blind date, she didn’t expect someone so perfectly gorgeous. She’s a mousy librarian—totally not in this man’s league. And judging by his odd reaction when she opens the door, he knows it, too.

Air Force Pararescuer Ryan Flannery avoids his hometown at all costs. He’s not thrilled about the date until he’s shocked silent by the prickly little librarian’s sweet curves and kissable lips . . . and her smart mouth. But then an argument leads to a kiss that spirals out of control. How can two people have so little chemistry outside the bedroom when they fit together so perfectly in it?

When their friends strand them in a cabin to "work things out," Bri’s not sure whether to kill him or put the industrial-sized box of condoms they find to use. Bottom line—Ryan’s career military and hates the tiny town she loves. He’ll leave, just like everyone else in her life. And if she’s foolish enough to give him her heart, he’ll take it with him.

Review:
I always enjoy Katee Robert's books when I'm looking for some brain candy, if you want a story that is funny, sweet and hot then you really can't go wrong with anything she's written and In Bed with Mr. Wrong is a perfect example of why.

Bri and Ryan are set up on a blind date by Ryan's brother Drew who also happens to be one of Bri's best friends. After a huge misunderstanding things are pretty much a disaster from the start and the pair can't seem to resist sniping at each other. Even though they can't seem to stop arguing there is no denying the attraction they feel for each other, and their rows always seem to end in kisses hot enough to set them both on fire. Bri is determined to avoid Ryan and the temptation he offers, especially since she knows that he'll be leaving in a couple of weeks on his next tour of duty and getting involved is almost guaranteed to end in heartbreak but Ryan is desperate to get to know her better. When they end up stranded in a cabin for three days thanks to the help of some meddling friends it doesn't take them long to realise what an amazing physical connection they have but can they stop arguing long enough to find out if they actually have enough in common to build a lasting relationship.

I really liked both of the main characters, Bri is quite shy until you get to know her but she's also incredibly down to earth and the kind of woman you could easily be friends with. She's never had much in the way of a family and all she really wants is to settle down somewhere and build a life for herself, she loves her job as a librarian but she also wants a relationship and to start a family of her own. She loves the small town she has moved to and even enjoys the way everyone knows everyone's business and that people really seem to care about each other. Ryan was the town bad boy growing up and the nosy busybodies have never let him forget it, even though he has achieved a lot in his life as an adult and is proud of his job as an Air Force Pararescuer he always feels like a naughty child in his home town and he has spent years avoiding going back there. The last thing he wants is to settle down, especially in the place he grew up so he really shouldn't be interested in starting anything with Bri. She's unlike any woman he's ever known though and perhaps being with her might make the town feel like home.

I laughed a lot reading this story, trouble certainly seems to follow Ryan around and the couple managed to get into a few embarrassing situations that were really amusing to read about. They were actually a really cute couple and the chemistry between them was incredible. I did get a tiny bit irritated with their constant arguing at one point but I enjoyed the banter between them and I was glad they were able to put their differences behind them. In Bed with Mr. Wrong was a really quick read and I enjoyed every minute of it, I loved the side characters so was really excited to find out that Drew and Avery have a book of their own and I can't wait to see how things play out between them.