I received the following press release from Hodder & Stoughton and I'm such a huge Laini Taylor fan that I had to share it with you all! 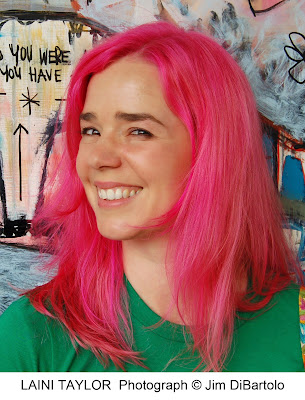 Following the international success of the Daughter of Smoke & Bone trilogy, Hodder & Stoughton will publish three new young adult novels by Sunday Times and New York Times bestselling fantasy author, Laini Taylor. Kate Howard, Associate Publisher at Hodder, acquired British Commonwealth rights (excluding Canada) from Jane Putch of Eyebait Management. The first book, The Muse of Nightmares, will be published in Autumn 2016 and is a fantasy young adult novel with a gothic flavour. Taylor describes it as follows: ‘There was a war between men and gods, and men won. The few surviving children of the gods have grown up in hiding, dreading the day they know must come: when humans find them, and end them. That day is at hand.’ The book will simultaneously release in the US from sister company Little, Brown Books for Young Readers.

Kate Howard said: ‘I am so thrilled to publish Sunday Times bestselling Laini Taylor’s new books across the UK and Commonwealth, starting with The Muse of Nightmares next Autumn. Laini’s imagination is second to none, the fantasy worlds she creates truly unique and I know that come Autumn 2016, The Muse of Nightmares will be the book everyone is talking about.’

Of The Muse of Nightmares, Taylor shared, ‘I’m excited beyond belief to have found the proper form, at last, for this story that’s been in my head for about two decades. I can’t say much about it, but I’ll say this: it’s about otherness, and yearning to belong in a place you never can. I can only hope that readers will respond to these new characters with the same passion as they have to Karou and Brimstone, Prague and Eretz.’

The widely acclaimed Daughter of Smoke & Bone Trilogy, for which Universal Pictures acquired film rights (with Joe Roth set to produce), is currently available in thirty-three languages. Of her experience meeting fans internationally, Taylor said, ‘The reception of the Daughter of Smoke & Bone Trilogy has been and continues to be a dream come true. I’m blown away by the incredible fan art, cosplay, and tattoos from readers all around the world, who give the books new life and new dimensions every day. Fantasy readers are the best.’

About Laini Taylor
Laini Taylor is the Sunday Times and New York Times bestselling author of the Daughter of Smoke & Bone Trilogy: Daughter of Smoke & Bone, Days of Blood & Starlight, and Dreams of Gods & Monsters, and the companion enovella, Night of Cake & Puppets. She is also the author of the Dreamdark books, Blackbringer and Silksinger, and the National Book Award finalist Lips Touch: Three Times. She lives in Portland, Oregon, with her husband, illustrator Jim Di
Bartolo, and their daughter, Clementine. Her website is www.lainitaylor.com.

I absolutely adore the Daughter of Smoke and Bone trilogy, Laini Taylor's writing is beautiful and she quickly earned a spot as one of my favourite authors so I can't wait to read The Muse of Nightmares!
at 01:07