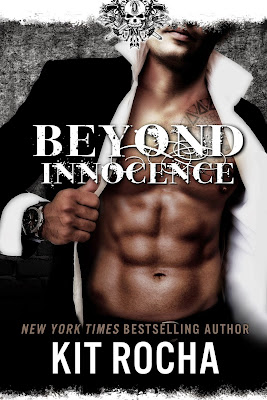 For years, Jared has existed on the fringes of both Eden society and Dallas O'Kane's Sector Four gang. He travels between these worlds, protected by his money and power--money he earned selling his body, and power that comes from knowing secrets. He's untouchable—until he starts a new life gathering intelligence for the O'Kanes.

Lili Fleming walked out of Sector Five with a gun, the bloodstained clothes on her back, and an icy determination to survive. She finds herself in a world where people live hard and love harder, and nothing's more terrifying than how much the O'Kanes wake her up, make her feel—especially Jared.

Emotion is a risk he can't afford, and a complication she doesn't need. But neither can resist the lust simmering between them, and the sparks that could either melt the ice around both their hearts…or get them killed. Because the only thing more dangerous than loving an O'Kane is loving a spy.

Review:
I think this series might be the death of me, these O'Kane guys and gals just really know how to rock my world and if I could pick one series to dive into and die of hedonistic pleasure this would be it! Every time I think Bree and Donna (the writing duo behind the Kit Rocha name) can't possibly top the antics of the last book they happily manage to prove me wrong and Beyond Innocence was everything I could have hoped for and then some.

I have been desperate to read Jared's story ever since he was first introduced into the series, his best friend Ace (who happens to be my favourite O'Kane!) has been trying to get Jared to join them for as long as I can remember but Jared has been determined to stick to the sidelines. Well, that's what we've always been led to believe but it turns out Jared's motives are a lot more complicated and he's actually Dallas's most loyal spy and the O'Kane eyes and ears inside Eden. Jared's position in Eden society has allowed him access to uncountable secrets and he's more than willing to share, one one condition - Ace and the others must never find out what he's up to. Jared knows he is risking his life but he wants to do something worthwhile and he's doing his best to survive in an impossible situation. I was already half in love with him but the more we learn about his past and the amount of danger he is willing to face for the O'Kanes the easier it was to fall even harder.

I wasn't too sure what to expect from Lili, she appeared in Sector Four in the middle of the night dressed in a blood spattered nightdress and a fur coat with pockets full of drugs having killed the guard holding her captive in Sector Five. Lili has seen it all as the daughter and then the wife of Sector Five's most recent leaders, she learned the hard way never to trust anyone and that any kindness always comes at a price. Life in Five was a nightmare but she knew where she fitted in and what the rules were and now she's lost and completely adrift because she has no idea what the O'Kanes expect from her. She survived the first few months in a drug induced haze but now the drugs are running out and she is terrified. Lili brings out all of Jared's protective instincts, as someone else who is a relative outsider amongst the O'Kanes he knows he can show her the rules and help her settle in but when he is risking his life on a daily basis it isn't a great idea to get involved with anyone. I have to admit I was worried about Lili in the beginning, I wasn't sure she would be a worthy heroine for Jared because she seemed so weak and innocent but she has a core of steel and once she sets her mind on something nothing will sway her from her path. She really proved herself as a valuable asset to Jared and the pair make a fantastic couple. Jared is incredibly patient with Lili and he takes the time to introduce her to her new life slowly, Lili is a willing student and it doesn't take long before she is pushing Jared to let her be his equal partner, both in bed and in business.

Of course you'd expect the sex to be hot considering Jared's profession and I wasn't disappointed there. Lili and Jared share some incredibly sweet and tender moments but there is still plenty of the down and dirty action you'd expect from this series, we even get to see the couple experimenting with Ace, Rachel and Cruz and trust me that's not a scene you want to miss! What I love most about these books are the characters, they're all flawed in different ways and incredibly realistic and I love seeing them open up to each other as they learn about their own deepest and darkest desires. The world building is fantastic too and this is a series I would definitely recommend reading in order so you get the full benefit of the background of the different Sectors and Dallas's battle for control. We're definitely in for some interesting times ahead and I'm even more excited to read Beyond Ruin now that I know who the main characters are going to be.