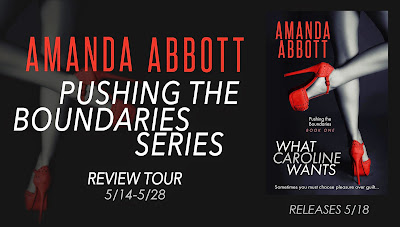 To celebrate the release of What Caroline Wants, the first book in Amanda Abbott's new Pushing the Boundaries series, I'm thrilled to have an extract and a fantastic giveaway to share with my readers today. This book is hot as hell and I have not one but TEN copies of it to giveaway today! Make sure you check back later to read my full review but in the meantime let me give you a little more information about the book: 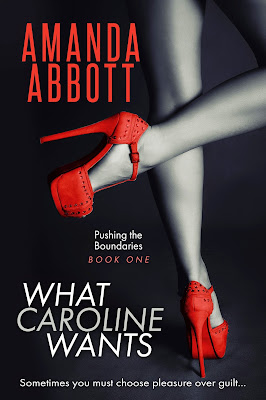 Caroline and Jason Stratton have always been hot for each other. Married right out of college, they’ve had a great sex life. But when they discover that their best friends and neighbors, Piper and Michael Collins, have experimented with a few extracurricular adventures during their ten year marriage, Caroline and Jace’s sexual world is rocked.

The Strattons quickly find that inviting others into their bedroom might be something they want to explore. But getting Caroline to reconcile her Southern guilt is another matter altogether. So they decide to take it deliciously slow, exploring every avenue.

Their adventures lead them to Emma and Pete, and after a fun, sexy dinner date out, and an incredibly hot car ride home, they’re in. But once they decide to scale that mountain, all bets are off. In the end, Caroline must make a decision—and it’s one she’ll have to live with forever.

*This book is ridiculously sexy, filled with high-octane moments between the couple as they figure out what makes them tick. The book contains: explicit sex, voyeurism, and light couple swap. **There is no cheating, everything is consensual between all participants.

What if we just try it once?” Jason Stratton dipped his razor into the sink and grinned into the mirror. “If we don’t like it, we can chalk it up as a learning experience and move on.”

“You don’t just move on from having sex with your neighbors,” Caroline stated from her spot by the bathroom door. Her shoulder was casually braced against the jamb, her arms loosely crossed as she watched her husband, clad only in a crisp white towel, shave. “That doesn’t happen. And I know you’re just trying to mess with me, Jace, but I shouldn’t have to tell you that even considering that idea for more than one millisecond is completely insane.”

Jace brought the razor up and tracked a line down his cheek. “I don’t think it’s all that crazy. I get why people do it. You heard Michael as clearly as I did last night. He and Piper are in it for the raw sexual pleasure. They also told us there are strict rules you have to adhere to, and Piper said no emotional ties are allowed.”

Caroline snorted, unfolding her arms as she turned and padded back into the bedroom. “Yeah, right,” she threw over her shoulder as she snatched up an errant shirt and tossed it into a nearby basket. “Emotions are the only reason anyone would do a thing like that. Inviting others into your bedroom is not something you walk away from unscathed. It’s the kind of thing that changes lives forever—and you know I’m right!”

The night before, during a typical BBQ-turned-late-night-drinking party in their backyard with their neighbors, and best friends of the past five years, Michael and Piper Collins, the tipsy talk had turned from casual banter and had entered uncharted territory. Michael and Piper admitted to having had a few extracurricular experiences during their nearly ten years of marriage.

Caroline had been utterly shocked. She couldn’t believe Piper had never mentioned one thing about it, and she had essentially shut down after the confession. But Jace had probed them for more than an hour for details, which they’d given freely.

Once they’d left, Caroline and Jace had the best sex they’d had in the last two years.

It had been wild, uninhibited, and totally hot. Caroline was still reeling from the intensity of it, her toes curling into the plush carpeting as she took a seat on the edge of their bed. When a very tangible image of last night’s lovemaking flooded through her—her husband entering her hard and fast—it sent a batch of tingles racing up her spine. But unlike her bold, seemingly unfazed-by-anything husband, it had taken Caroline years to get to this point in their marriage—a point where she felt free enough to let go of her inhibitions during sex.

Through no fault of her own, she’d been raised in the belly of South Carolina like a proper Southern belle. And, if asked, she’d fully admit she’d been unwilling to experiment at the beginning of their relationship. She’d been absolutely fearful that she would break some kind of unspoken code of behavior if she actually enjoyed sex. But her patient, charismatic Midwestern husband had continued to coax her into trying new things, and over the years she had slowly loosened up in the bedroom and learned to parcel away that “I’m going straight to hell” moment that always crept up on her the morning after they did something dirty.

If she was completely honest with herself, once she’d experienced her first orgasm, her sexual awareness had exploded like a fire hydrant on a hot June day.

Since then, she’d opened to trying a variety of things—things she’d never thought in a million years she’d be okay with. Her handsome, rugged husband was responsible for all of that. He made her feel safe and happy.

He was the love of her life.

And now he wanted to do something crazy that could rock their perfect world forever.

Caroline stood and headed back to the bathroom, where she leaned against the doorjamb. Jace grinned at her reflection in the mirror as he finished shaving, whisking his razor in the sink in between strokes.

“You’re impossible,” she told him. “A scamp with no morals whatsoever.”

“I have plenty of morals, but they have nothing to do with this particular scenario,” he replied with a wink. “You know how I feel about sex, Care. Sex is not love. You just have to choose pleasure over guilt. If you did that, this could be a gold mine of sexual happiness for us.” He smiled at her like a fool.

She crossed her arms. “A gold mine? Sounds more like a minefield of unhappiness to me. And since you’re continuing to push this agenda, is this your way of telling me that you could share me so easily? Because the thought of sharing you makes my stomach ache and bile rise in my throat.”
Jace caught her expression in the mirror and dropped his razor into the sink. He turned, tugging the towel from his waist, using it to wipe away the rest of the shaving cream as he strode forward.

Caroline tried to turn away, but her husband caught her wrists, pulling her close, encircling her waist, and hugging her tightly to his chest before she could move. “Of course I couldn’t share you easily,” he murmured near her ear, kissing her neck the way she liked. She braced her hands against his shoulders and pressed back, letting him know his advances weren’t entirely welcome. “Caroline, you dazzle me every time I look at you. From the very first moment I ever laid eyes on you, I was hooked. Nothing’s going to change that. Pleasure to me is just that—pleasure. I’m not looking to find a new connection with anyone. I just want to find what makes us tick and, from there, make it extraordinary.” He lingered over her collarbone and made his way slowly to her ear, ending with his lips tugging her earlobe. “Last night was completely amazing. You have to admit it,” he whispered in her ear. “We haven’t had sex like that in a long time.” He slid a hand up and used his thumb to caress a particularly sensitive spot on her neck. She shivered. “It could’ve been a coincidence, but I don’t think so. What Michael and Piper told us had everything to do with it. It was like they doused us with lighter fluid and lit a match.”

Caroline had fallen for her husband the first time she’d seen him, too.

She angled her head up. “Fine, I admit it. It might’ve been sexy to hear about someone else’s indiscretions—in that very moment.” She shook her head. “But what you’re suggesting is dangerous. I think we tick together just fine without anything extra. And I don’t believe pleasure can be wrought without an emotional bond. A person needs to be connected to hit all the right notes. If we did something like inviting others into our bedroom, there would be a steep price to pay. It’s not something you just do willy-nilly.”

Jace chuckled. “I love it when you talk Southern to me.” He walked her backward toward their king-size bed, his arms still tightly wrapped around her, the towel long gone. When the backs of her legs touched the end of the bed, he gently untied her robe. “I agree with you, by the way,” he said as his hands brushed over her bare shoulders, coaxing the soft terry cloth to the floor. “This isn’t something we should consider doing without a lot of thought, and I don’t want to share you either, believe me. But last night the sex was cataclysmic and I don’t care how we got there. If it took our neighbors to get us that horny, so be it. You were on fire, and I loved every minute of it.” He eased her back on the rumpled covers. “You were dripping wet by the time we got to the bedroom, and I couldn’t get your clothes off fast enough.” He braced himself over her, his arms on either side of her head. He dipped lower, his mouth sliding over hers, melding perfectly as their tongues entwined.

She let out a soft sigh.

The sexy talk last night with their friends had indeed turned her on.

Caroline’s eyes had been riveted to his hand as it’d crept upward. To her relief it’d stopped a respectable distance from Piper’s upper thigh and had ended up being very innocent.

Titillating, but nothing untoward.

“I was on fire,” Caroline admitted. Jace kissed her again, and when he finally broke away, both of them were panting hard. “But it was for you. There’s a big difference. I didn’t want Michael in my bed, I wanted you.” Michael was a very handsome man, ridiculously so, but for Caroline, he didn’t hold a candle to her husband’s natural charm and all-American good looks. Jace lay down next to her, propping himself up on an elbow, smiling. “I knew it got to you. It made me hot for you, too. And just like right now, while we’re talking about it, it’s turning us on again.” He placed two fingers between her breasts, brushing them lightly down her chest to her stomach…

Now if that extract has caught your attention I have 10 ebook copies of What Caroline Wants to giveaway to my readers. You can enter using the Rafflecopter form below, the giveaway ends on the 25th of May and the winners will be announced soon afterwards. Prizes will be sent out directly by Amanda Abbott so by entering you are giving me permission to share your email address with her.