Review: His to Keep - Katee Robert 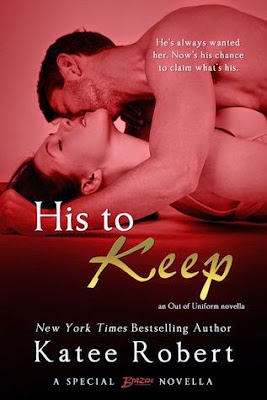 He’s always wanted her. Now’s his chance to claim what’s his.

School teacher Marceline Bellini gave up everything—men, sex, anything resembling a social life—to raise her young daughter. To be the perfect parent. But when she attends an engagement party in her standard stick-in-the-mud mode, her friends begin plying Marcy with shots. Just enough to convince her that a little fun doesn't sound like a bad idea . . . and having some naughty fun is an even better one.

Like finding herself deliciously pressed against a dark alley wall by the very familiar and very hot body of her best friend's older brother.

After years of waiting in painful silence, police officer Aaron Robinson finally has Marcy’s attention. And man, does he have it. But nothing could have prepared either of them for the rush of fiery lust between them. So he’ll just have to convince Marcy he’s for real. And that a rainy, lust-fuelled romp is the first step to a lifetime of completely imperfect happiness . . .

Review:
The most important thing in Marcy's life is her young daughter, everything she does she does for Charlie and dating has become a thing of the past. That all changes when her best friend's brother makes a move on her at an engagement party, Marcy has had a crush on Aaron since she was seventeen years old but this is the first hint that her feelings are reciprocated. Aaron has wanted Marcy for as long as he can remember but circumstances have always kept them apart, now he's had a taste though and nothing will stop him from making Marcy and Charlie a permanent part of his life.

His to Keep is a novella in Katee Robert's Out of Uniform series and although Marcy and Aaron didn't play much of a role in the first book (I only remember one very brief conversation with Marcy & I don't think Aaron made an appearance at all) this story does give us the chance to catch up with Bri, Ryan, Avery and Brent which I really loved.

As this is a fairly short story (around 100 pages) the romance between Marcy and Aaron develops very quickly but because of the history between them I didn't have too much trouble with that. They have great chemistry and I loved the way Aaron looks out for Marcy. The epilogue was completely adorable and made my heart melt a little.

Overall His to Keep is a great read it's a hot and spicy with great characters and a really sweet romance and I'd definitely recommend it. I'm really excited to read Avery and Brent's story next too, this series is another winner from Katee Robert.